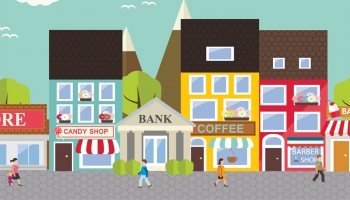 Traditional large banks are facing growing pressure amid the advances digital banking within regional and community competitors, according to a new report from Kroll Bond Rating Agency (KBRA).

The coronavirus pandemic has accelerated the rise of digital banking with increased emphasis on online lending, deposits, and processing, the rating agency reported.

Smaller regional and community banks across the US have been responsible for a large part of the support provided to small businesses under the Paycheck Protection Program (PPP). Online services have allowed smaller creditors to push past their scale limitations and compete on a level beyond their inherent asset size via technology-enabled lending.

Smaller banks boosted their PPP lending capabilities by partnering with fintechs, such as New Jersey-based Cross River Bank, which partnered with more than 30 fintech companies to facilitate billions of dollars on small business loans.

Larger banks’ ability to invest in technology had previously made it harder for smaller banks to remain competitive, KBRA said.

However, electronic banking has redefined how customers access services, providing smaller banks with the opportunity to evolve their product delivery systems to lower cost-digital platforms.

While digital banking has become popular with consumers due to its accessibility and user-friendly interface, the report also highlighted increasing operating and regulatory compliance costs as a key contributing factor to banks switching to online banking.

New services such as remote deposit capture and online account opening have also aided the digital shift, coinciding with temporary cuts to in-branch services at the height of the Covid-19 pandemic last year.

The report cited MVB Financial’s 2019 sale of three branches located in the West Virginia panhandle. The bank redeployed the capital into its nascent fintech-oriented businesses with a focus on generating low-cost deposits and fee revenue opportunities.

Other banks have made similar moves to consolidate their branch networks on the back of their customer bases increasingly preferring online services.

Chicago-based Byline Bank is preparing to close 11 branches, nearly 20% of its network, this year after an increase in uptake of its digital services. Illinois’ Midland States Bancorp has made a similar move, reducing its physical branch network by 20% through 13 closures or mergers.