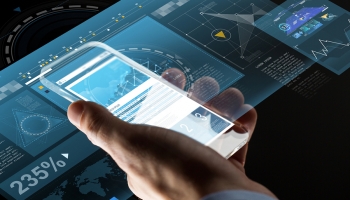 Mobile banking apps from Truist, Capital One and Huntingdon ranked highest for customer satisfaction, according to research from consumer analytics company JD Power.

Truist scored 881 out of a possible 1,000 for satisfaction, the research company reported. The rankings were based on a series of surveys of more than 17,500 people during March and April this year.

The COVID-19 pandemic has had a major impact on how US banking customers interact with their providers, boosting online and app-based banking significantly as people have been restricted from using branch-based services.

More than a third (37%) of retail bank customers are using their bank’s mobile app more frequently, JD Power found, while almost half (48%) said they had deposited a check using their mobile phone during the pandemic.

Ease-of-use, speed and accessibility of common features were all ranked as important features of the best bank apps by survey respondents.

Credit card apps scored higher, which JD Power said was likely due to their focused nature and simple functionality. American Express (886), Bank of America (874) and Chase (873) were the top three in this category.

The research also showed that the user experience with mobile apps was “generally better” than with website-based services. This was as a result of “greater levels of perceived visual appeal and streamlined layout on mobile apps”, JD Power said.

JD Power said its research suggested that “years of digital investments are paying off as banks support homebound customers to continue their banking activities”.

“Banks have been investing heavily in digital over the last several years and those investments paid off over the last three months as the COVID-19 pandemic dramatically accelerated the shift to digital, forcing many remaining hold-outs to finally take the plunge,” said  Jennifer White, senior consultant for banking and payment intelligence at JD Power.

“It’s never been more important for banks and credit card companies to make their digital offerings easy to access and use. Across these studies, the common trait among top performers is clear, smooth functionality that loads quickly and puts the information that customers need front and center.”

A separate study from Research And Markets, released last week, forecast that the global mobile payments market would grow to $12.4 trillion by 2025 – up from $3.7 trillion in 2019.

The increasing use of smartphones and government moves towards cashless economies are boosting this trend, the research showed, but variations in the quality of national banking and digital infrastructure would likely prove to be a headwind to growth.