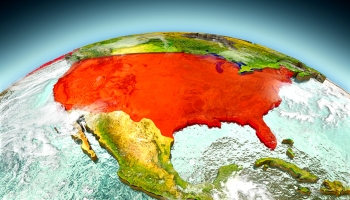 American banks have decided to shrink their foothold in the lending business in Europe and Asia, and are focusing more on the United States market due to the coronavirus crisis. European lenders will look to grab market share, a trend that will likely hit asset management firms very soon as well.

The moves made by America’s largest banks are not just because of rough waters ahead on the international front, but also an unprecedented demand for loans by businesses backed by the federal government.

The pressure to help the domestic economy is being felt by Wells Fargo, Bank of America and JP Morgan. While loans in America are fueled in part by the SBA’s PPP program that largely protects against downside risk for banks, companies such as Goldman Sachs do not have the same backstop on potential defaults in the European markets. So far, the European Union and the United Kingdom do not have equivalent programs.

The potential winners in this are BNP Paribas, Deutsche Bank (despite major problems of their own), and ABN Amro. Community banks in the United States might feel some heat as larger banks focus even more at home, although the small business loan program and how it has been implemented has made a good case for business banking with smaller banks that welcome small and midsize businesses as valued customers.

Outside of lending, however, global financial institutions such as Blackrock and Goldman Sachs have such a strong presence in Europe that they will not slow down other banking activities. The firms are American in name only, but are really global entities outside of the retail and overall lending market.

In many ways in the short term, the climate for banks has never been better during a major crisis due to the way the federal government has provided unprecedented opportunities for banks to make money given the circumstances.

The question is what constitutes a European company? Reuters reported that Bank of America turned down business in March from European based company Informa for a line of credit close to $1 billion. However, the conference and events giant produced a great deal of business in the United States in 2019, and employs American workers in major cities.

Many businesses including banks are reassessing global risk in building an international business, which is somewhat ironic given the global impact of the present crisis.