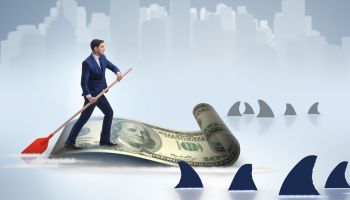 Subprime lenders took much of the heat for hurting the most financially vulnerable Americans during the last banking crisis. They are back, however, in a new form that can be just as dangerous through online installment loans. The loans allow for Americans with less than perfect credit borrow money over a relatively long period of time with astronomical interest rates. They are attractive to the middle class that have hi bills to pay and want a way out.

But the consequences to these loans on the American working class are staggering. Bloomberg reported that subprime borrowers owe $50 billion in these types of loans. While household income is rising, it is rising much slower than the costs that the middle class is taking on. Home prices have risen faster, healthcare has risen faster, and every purchase such as car ownership or leases are having consumers take on more debt. Americans have borrowed a lot more than they are making. While interest rates have gone down significantly, the middle-class consumers are not always the ones that are getting the benefit, as the rates are only for Americans with excellent credit.

Online installment loan interest rates are usually two to three times higher than the home mortgage rates in the news. With online lending firms in the market, access is also there for the taking as the working class cannot walk into a bank and get short term loans when they are struggling.

These loans are one of the answers to the question why Americans have so little saved even when employment numbers are at record lows. Families fall into debt, and government regulation has not moved quickly enough to stop the trend rising again. Alternative credit providers are winning, as online installment loans pull people down. It may be even worse this time around, as the loans have longer cycles-as long as five years, leaving the consumer with a long time to pay back a loan that is crippling their savings and likely their credit score.

What can banks do? Banks can try and speak to customers about better options. For instance, a home equity line of credit will usually have a higher interest rate than a home loan, compared to an online installment loan, it is extraordinarily low. Even a bridge loan from a bank will no doubt save a consumer thousands of dollars over the term of the loan. Lastly, banks need to advocate for comparable regulations monitoring these new alternative credit sources.

Politicians can continue to point to banks as one of their favorite punching bags, but they are often one step behind when it comes to regulating the real sharks.