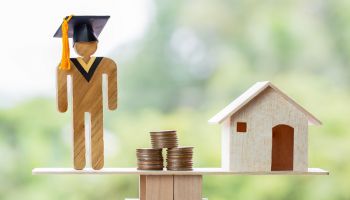 Robert F. Smith, founder of Vista Equity Partners and a billionaire, shocked Morehouse graduates this weekend when he announced that his family would pay off all 2019 graduates’ school loan debt. He went on to challenge alumni to do the same for future classes, stating that the 2019 one was his.

The announcement received substantial press not only for the kind gesture, but also because student debt burden has become a national issue. What Smith might not have thought about is that his gesture and perhaps those that follow his lead might not only impact the students in the long run, but also the housing market.

The good news for prospective first time home buyers is that interest rates have recently decreased despite expectations several months ago that the fed would steadily raise long term rates. However, that does not mean it gets any easier for new buyers with risky credit ratings to obtain a loan.

The country’s younger population has had its credit ratings disproportionately lowered due to unprecedented volume on school debt delinquencies. Statistics for Americans late on college loans are even greater than credit card delinquencies. This has had an effect on would be new entries, with new owners making up only about a third of the market.

While the supply for lower-priced properties has fallen and stricter lending standards evolved, this has made mortgage approvals tougher amid a record in delinquent school debt. Even before the college loan delinquencies rose, banks and credit unions had already increased standards for lending requirements after the last banking crisis.

Student loans continued to rise despite the fact that other lending slowed throughout the last decade. Bloomberg reported this week that more than 20% of Americans are paying off student loans, an extraordinary figure when coupled with standard car loans, home mortgages and credit card debt. The net result is young adults are taking a pounding on credit reports due to college loan defaults.

Since it can take years to raise a credit score after a default, the housing market will be impacted. The effects may not be seen right away given the strength of the economy, but the real estate market ultimately needs a healthy flow of new entries in order to be stable.

While loan forgiveness would have  its consequences on lenders and the financial markets as a whole, a generation saddled with debt that they cannot climb out of will also have its consequences, particularly if the economy slows.