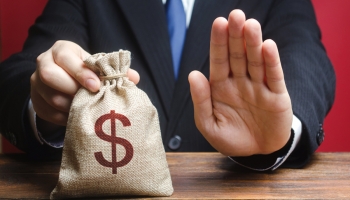 The Office for the Comptroller of the Currency (OCC) has fined the former chairman and chief lending officer of an Oklahoma bank for failures around governance and lending practices.

James Ratcliff, the former chairman of the First National Bank and Trust Company of Vinita in Oklahoma, and ex-CLO Tony Fritz have been fined $100,000 and $20,000 respectively for being “recklessly engaged in unsafe or unsound practices” in relation to the bank’s loan offering.

The OCC’s regulatory notice regarding Ratcliff alleged that he arranged payments for third-party vendors that he owned without the proper documentation, failed to ensure staff were properly paid for the work they performed, and approved or originated “multiple unsafe or unsound loans”.

Ratcliff also failed to disclose conflicts of interest in relation to loans made to companies in which he had an ownership interest, the regulator stated.

The OCC’s notice stated: “[Ratcliff] engaged in violations of law, regulation, or order, recklessly engaged in unsafe or unsound practices, and breached his fiduciary duty to the bank; which violations, practices, or breaches were part of a pattern of misconduct, caused or were likely to cause more than a minimal loss to the bank; and demonstrated wilful or continuing disregard for the safety and soundness of the bank.”

In Fritz’s case, the OCC cited failings related to “credit administration and risk management practices and controls” as well as permitting or facilitating “multiple unsafe or unsound loans”.

The former CLO also “failed to provide credible challenge to members of senior management who maintained loan portfolios and failed to maintain adequate oversight over their portfolios”, the OCC said.

Neither Ratcliff nor Fritz admitted or denied the findings, but consented to the OCC’s decisions.