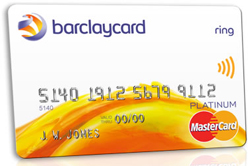 New Barclaycard Ring MasterCard aims to be first bank card partly run by its customers.
Customer input in product design isn’t new, in the traditional sense. Banks offering retail products and services have engaged in customer surveys, focus groups, test marketing, and other research for decades. But ultimately the decisions remained with the bank. Barclaycard Ring will be “ruled” by a community of cardholders, which will present unique marketing, design, and compliance challenges. Barclaycard US envisions sharing some very basic decisions with customers, even the program’s profit-and-loss statement—and sharing some of the profit, too.

“This is the next evolution of the affinity card model,” says Paul Wilmore, managing director-consumer markets, Barclaycard US. It will allow people to create “virtual affinities,” he explained. Looking further back, he adds, “American Express calling people ‘members’ was a brilliant move. We are taking that to the next level.” In some ways, he adds, Barclaycard Ring will look like a “virtual credit union,” though it will definitely be part of a bank.
Where the idea began
Chances are most folks wouldn’t walk up to a stranger and ask them to recommend a restaurant. Or a car. Or a dishwasher. Nor would they ask the stranger what stores to avoid, and how to sidestep a bad meal.

But we increasingly take the advice of complete strangers over the internet where there is some commonality, even if  it only resides in the use or need of a certain product. Do you disagree? If you’ve ever read and gone by a review on Amazon.com, comments about a hotel on Orbitz.com, or a beef about something on Yelp, you’ve already exploded your argument.

The growing power of the internet pick or pan impresses Wilmore.

“People look for recommendations from total strangers,” says Wilmore, who is in his mid-40s. And sites like Groupon, where no one gets the deal of the day until and unless a set number of people sign up for it, also got Wilmore and his team thinking.

In early 2011, Barclaycard US began putting together these recent consumer tendencies with additional trends. One was the bank card industry’s lightning-rod status with consumers, which culminated in, among other things, the CARD Act of 2009. Then there was the general post-crisis attitude towards the banking industry.

Barclaycard US’ Paul Wilmore says the Ring concept could grow into multiple communities--independently or through splits in the original community.
Now for something completely different
The card product itself is the simplest aspect of the Ring program. Indeed, Wilmore says it was designed to be simple. Communications regarding the program are designed to be in plain language. The card carries an interest rate of 8% for all balances and charges no balance transfer fee nor annual fee.

Wilmore says the card was designed for the “fiscally responsible consumer who carries a balance,” and that the “core value” of the program is the low 8% APR. However, in the pilot group launched in the fourth quarter of 2011, Wilmore says Barclaycard US found that the opportunity to have a voice in the product pulled harder than did the low rate. Again this confirmed the company’s belief that consumers want something new in bank cards.

At present, the company is accepting signups for invitations to apply for Ring. The official launch of the broad program will take place in April. Wilmore says credit standards for the program will be typical.

Cardholders approved for membership in the program and its community will have access to a private social business platform. A central part of the program will be a forum where community members can exchange ideas, share knowledge, and provide direct feedback to Barclaycard US to help determine future program features. This forum will not be open to the public, and it will include a posted profit-and-loss statement showing the community members how the card is doing financially.

“Our intent is to be as transparent as we can be with our members,” says Wilmore. “There will be no black box. You’ll know everything that will happen.” 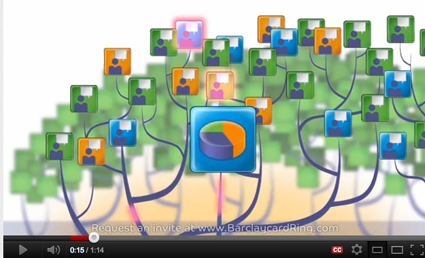 Barclaycard Ring’s official Youtube video gives a consumers-eye view of the basics of the program.


The P&L proves important because the intent is that after Barclaycard US takes care of bank shareholders, it will give program profits to community members. This is called “Giveback” and one of the decisions the community members will address is whether to take the funds personally or, say, to donate them to charity. The program will not offer any other form of points or rewards.

That is one of the discussions that will take place in the forum. Wilmore anticipates that there will be three or four significant issues each year that community members will tackle.

Other questions will be surfaced along the way. For instance, the pilot community recently had an online discussion regarding whether community members who add to profitability by actively recruiting new members to Ring should get something extra.

Active participation will be encouraged by such measures as the “Your Ring” page each member has. A gray ring gets filled in with colored segments, the size of each determine by types of participation, such as going paperless, referring friends, etc.
A virtual “shareholder” meeting
Some decision points will be operational, Wilmore suspects. He mentions the decision to process transactions on-shore or off-shore as example of the kind of issue that could come up.  Essentially, he says, management would put the facts before the community members and ask how they felt about the matter. In the case of his example, they might be told that on-shore processing would cost X dollars, and that off-shore processing would cost Y dollars. Thus the cardholders could weigh in, with those who back an “employ American” strategy having their say and those who want to keep costs down--remember that piece of the action--backing the cheaper alternative.

Wilmore says he expects Barclaycard US to be “indifferent” to the final decision of the community regarding anything touching on overall profitability, because the shareholders’ interests are built in. “Giveback” comes from money earned after the shareholder hurdle has been passed.

While many of the people shown on the Barclaycard Ring website are a diverse group of younger individuals, Wilmore says that the program is not aimed at a specific age demographic.

“The broader population is getting more comfortable with sharing experiences through social media,” says Wilmore, so it is likely that customers of many ages will be interested in Ring.

What happens if a real split develops in the community? That is an interesting potential issue that comes under the “we’ll see” category, Wilmore indicated in an interview with Banking Exchange.

Over time, Wilmore says, Barclaycard already sees the potential for starting additional cardholder communities built around other product concepts besides the low-rate, simple Ring card. However, he allows that over time community members themselves might drive formation of new groups.

Wilmore speculates that as the original group--indeed, any group--becomes larger, it will tend to “lose some of the connective tissue” that established common interest in the first place. An especially divisive issue might cause a group to split along the lines of that issue. Again, Wilmore uses the on-shore/off-shore debate as an example.

Ultimately, says Wilmore, “communities could ‘self-coagulate’ over issues.”
Compliance challenges of “crowdsourced” decisions
The compliance fraternity out there is no doubt thinking that it is difficult enough to keep a product or a program in compliance when the government holds still for a while. When change can not only arise from regulators and internally, but from the customer base as well…

Wilmore acknowledges that this will be a challenge, and notes that good communication from the company will be essential. A community moderator has already been appointed, not as censor but to make sure the discussions go smoothly and that everything remains on the up and up.

One point that community members will need to get used to is that credit card programs can’t be changed at the click of a mouse on the basis of a community’s decision.

“Changing credit card terms and conditions isn’t as easy as it used to be,” says Wilmore. Especially since passage of the CARD Act, there are required notices and disclosures, plus the need for opportunities to opt out. So overnight gear shifts won’t always be doable.
A personal angle
Part of Wilmore’s belief in the strength and potential of online communities comes from  his own online activities. Among them is membership in LinkedIn’s Credit Card Professionals Group, which includes over 31,000 members.
He notes that some professional online communities rank members by their activity and contributions to the group.

“Sometimes people who earn the highest status levels in the community put that on their resumes,” says Wilmore.

Wilmore doesn’t expect Ring to wind up on resumes. But he adds that that trend underscores that communities should be taken for real.

More in this category: « American Express connects with small business professionals on Linkedin BOFA & Citi ramp up Ipad app marketing »
back to top