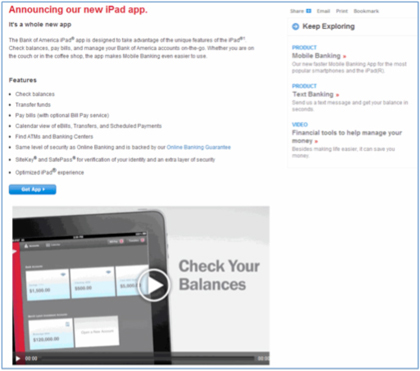 In the wake of Apple’s recent launch of its newest iPad, additional attention has been placed on the iPad apps available from banks and other financial institutions. Discover’s announcement of its new card management-centric iPad app only amplified this buzz. While many banks and card issuers now offer iPad apps, only two major banks that we track through our Bank Monitor service--Bank of America and Citibank--make a strong effort to market the iPad apps they’ve developed online within their public websites.

It is perhaps unsurprising that these firms are leading the charge towards banking via the iPad, as they have been active in mobile handset-based banking for several years. It should be noted that Chase offers an iPad app as well. However, the firm does not offer any information specific to the iPad on their public site, instead grouping it in with promotion of the Chase iPhone app.
BofA’s iPad app: A rather quiet rollout
Though the iPad apps from both Bank of America and Citibank are relatively new, each bank has its own promotional strategy. The first of the two to launch their app, Bank of America is not yet offering information about the app within the Mobile Banking page of their public site. Instead, the firm provides information and links for the app within its Solutions sitelet, learn.bankofamerica.com.

While users who search for the BofA iPad app through its on-site search bar or via a search engine will undoubtedly locate it, it is odd that the firm is not more actively promoting it on the main public site. When interested users do reach the iPad App informational page, they are greeted with a brief description of the app, along with a bulleted list of its positive attributes and key features. Below this, in the most compelling promotional aspect of the page, Bank of America offers users a How It Works video--a great feature for convincing users to try the app.
B of A iPad Promotion Page (Truncated)
Citibank’ iPad app: Much easier to find
Unlike Bank of America, Citibank is promoting its iPad in a forthright manner, through a Mobile & Tablet Banking section easily accessible from the public site navigation menu. 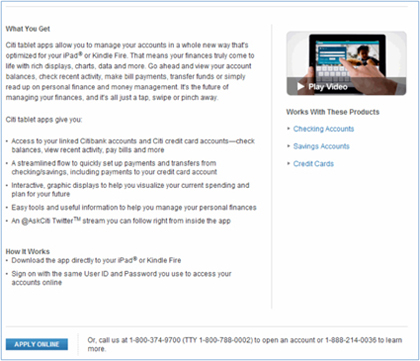 
iPad app promotion won’t be quiet for long
With the ongoing success of the iPad, we expect to see two key trends going forward.

First, more banking firms will introduce native apps for the latest version of Apple’s tablets. (A native app, or application, is an application program that has been developed specifically for use on a particular platform or device.)

Second, those firms that offer an iPad app will ramp up their promotions.

Not only do we think banks will create graphic ads promoting their tablet apps and sprinkle them throughout their public and private websites, we also expect firms to create more interactive promotional pages, allowing interested clients to test drive the app on their computer (or in their iPad’s browser) prior to downloading it.

If done right, an iPad app can reinforce a tech-savvy client’s affinity toward a bank or banking product and help the firm stand out against its competition--a boon for every bank, regardless of size.
By Doug Miller, senior analyst, banking and cards, at Corporate Insight. He is responsible for the Bank Monitor, Credit Card Monitor, and Small Business Card Monitor services.

Schroders, Ninety One, and Newton IM are among the in...

The investment firm failed to carry out ESG screening...