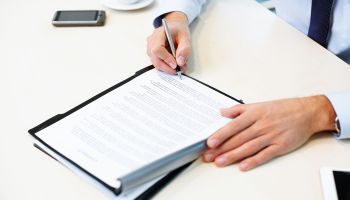 The new TILA/RESPA combined disclosure forms are out in final form. They are different and long, compared to the old forms.

One reason they are longer is that they include new information required by the Dodd-Frank Act. But the Consumer Financial Protection Bureau’s claim that it has reduced the number and length of disclosures is a bit of a stretch. The GFE is three pages and the settlement disclosure is five pages.

How this is shorter is a bit of a puzzle.

The forms themselves are also interesting. A first look at the new forms shows that the RESPA—Real Estate Settlement Procedures Act—format, rather than the TILA—Truth in Lending Act—format, dominated the process. The format resembles HUD’s GFE and HUD-1 forms. They are nothing like the Truth in Lending disclosures.

Another difference from TILA is that the form focuses on settlement costs and doesn’t give in-depth attention to the costs of credit—especially after settlement. Almost all of the numbers disclosed are based on arithmetic rather than the math used in TILA. While this has the advantage of enabling people with only a second-grade education to understand the numbers, it fails to communicate some of the most important information in TILA.

In fact, people familiar with the old Truth in Lending and Regulation Z forms and procedures will find a great deal is missing. And this raises some questions.

Something lost in the translation?

The Truth in Lending Act itself requires certain disclosures. Presumably, these are not optional—particularly when the Act defines five material disclosures and then uses those material terms to measure compliance and extend the rescission period.

TILA’s material disclosures are the APR, Amount Financed, Total Finance Charge, Total of Payments, and the payment schedule. There is a sixth material disclosure—Total Sales Cost—if the transaction involves a sale by the creditor.

The material disclosures play several important roles in TILA. First, they must be accurate. Inaccuracy leads to either restitution or legal liability. For purposes of rescission, the consequences are even worse. The borrower’s right to rescind runs for three years, rather than three days, if the material disclosures are inaccurate or not provided.

Because CFPB followed the RESPA approach to form design, the question becomes: Where did these material disclosures end up?

They used to be grouped together in what was called the “federal box” and were—as TILA requires—more prominent than other disclosures.

None of TILA’s material disclosures made it to the front page of the new merged settlement disclosure form.

Where are “the usual suspects”?

The APR is tastefully buried on a much later page. It follows the page on which other TILA disclosures (but not material disclosures—whether the loan can be assumed, whether there is a demand feature and the impact of late payments) are presented.

After this, three other material disclosures make an appearance with the APR on the settlement disclosure, although they do not appear on the early disclosure. The first one is the Total of Payments, followed by the Finance Charge. Then comes the Amount Financed, with the description: the loan amount available after paying your upfront finance charge.

These disclosures are accompanied by the new requirement in Dodd-Frank to disclose the Total Interest Percentage (TIP), a calculation based on the total amount of interest paid over the life of the loan.

The early disclosure form, the Good Faith Estimate delivered within three days of application, contains the APR (on the back page) but does not include the Finance Charge, Total of Payments, or Amount Financed.

These are disclosures meant to support credit shopping.

As the current forms are designed, the whole emphasis is on the settlement process rather than the cost over the life of the loan. So, since TILA’s purpose is to promote informed credit shopping, does this form carry out TILA’s mandate?

And where is the payment schedule?

There is disclosure of some payments—the first payment and the largest that will occur in the first five years of the loan. But there is no payment schedule showing the total number and amounts of payments.

The absence of the payment schedule raises some serious questions.

The Truth in Lending Act—as amended by Dodd-Frank—requires disclosure of the “number, amount, and due dates or period of payments scheduled to repay the total of payments.”

This is a material term, and a required disclosure.

If the loan is subject to rescission, material disclosures must be provided before the rescission period can run. Otherwise it runs for three years.

If the new form does not include all of these material disclosures, what happens?  Do all loans subject to rescission have a rescission period of three years?

What if some clever attorney make a case that the creditor failed to comply with the Truth in Lending Act even while correctly completing and providing CFPB’s form?

More in this category: « Making the most of your HMDA analysis Social media guidance finalized by regulators »
back to top