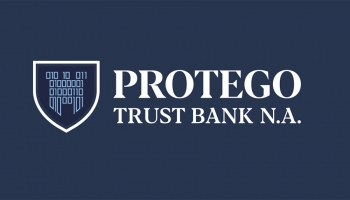 The US is set to welcome its latest new bank after the Office of the Comptroller of the Currency (OCC) granted conditional approval to Protego Trust Company.

The Washington-based company is set to become Protego Trust Bank, subject to meeting the terms of its OCC approval over the next 18 months.

Protego has been designed to specialize in digital assets for institutional investors, facilitating the holding, trading, lending, and issuance of cryptoassets. It is built on blockchain technology – the distributed ledger system that backs bitcoin and other digital currencies.

Chris Hunter, Protego’s head of business development, said the growing demand from investors for “secure and compliant access to digital assets” had already led to commitments of $1.5 billion in assets under custody when the new bank launches.

The OCC cleared US banks to begin providing payment and trading services for digital assets at the start of this year, after it approved custody arrangements last summer.

“We have been very fortunate to be able to work with knowledgeable and forward-thinking regulators at both the OCC and Washington State Department of Financial Institutions [DFI],” said Protego founder and executive chair Greg Gilman.

“The OCC has made huge strides in a short period of time with respect to the approval of digital banks, and we are thrilled to have been among the first approvals issued by the OCC. That approval would never have been possible without the foresight and vision of the Washington State DFI.”

Gilman is also a co-founder and managing partner at Science Inc where he oversees its subsidiary Science Blockchain, a backer of Protego.

Doug Mehne, Protego’s chief operating officer, highlighted that the company’s technology had been developed by “people who have worked within the largest financial organizations in the world and who understand the requirements of those high-performing, complex, regulated businesses”.

The Protego executive team between them has experience working at some of the largest banks in the US, including Goldman Sachs, Bank of America, State Street, BNY Mellon, Morgan Stanley, BNP Paribas and UBS.