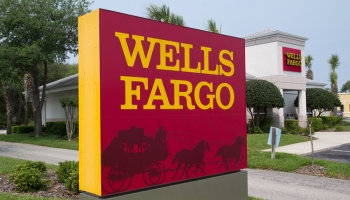 Wells Fargo has followed through on a pledge to reinvest the fees it generated through the Paycheck Protection Program (PPP) into supporting small businesses recovering from the effects of the COVID-19 pandemic.

After facilitating more than 185,000 PPP loans worth a combined $10.5 billion, according to official figures – more than almost any other bank in the US – Wells Fargo announced it would donate $400 million to provide further support to small businesses recovering from the impact of the COVID-19 pandemic.

The bank’s new Open for Business Fund aims to support companies to “keep their doors open, retain employees, and rebuild”, according to a statement published last week.

CEO Charlie Scharf added: “By donating approximately $400 million in processing fees to assist small businesses in need, Wells Fargo’s Open for Business Fund creates opportunities for near-term access to capital and addresses the road ahead to meaningful economic recovery, especially for Black and African American entrepreneurs and other minority-owned businesses.

“Wells Fargo is committed to helping small businesses impacted by COVID-19 stay open and get back to growth.”

The first focus of grants from the Open for Business Fund will be Community Development Financial Institutions (CDFIs) supporting Black and African American-owned small businesses, Wells Fargo said. The fund will provide $28 million to two initiatives to support these companies, which the bank said were closing “at nearly twice the rate of the industry” in the wake of the pandemic.

Ron Busby, Sr, CEO of US Black Chambers, said approximately 41% of Black-owned businesses had already closed during the pandemic.

“Black businesses have faced the largest shutdown of any diverse group in the country,” he said. “All of those businesses provided jobs so we need to accelerate an economic agenda that helps them recover.

“The funding that Wells Fargo is putting back into Black businesses and other minority-owned small businesses across the country is truly going to be appreciated and will give the kick start entrepreneurs need to continue and grow.”

More rounds of grants would be announced later in the year, the bank said.

More than half of small business owners surveyed by Wells Fargo expected “either stagnant or decreasing revenues in the coming 12 months”, despite many states relaxing or removing lockdown measures.

Wells Fargo said it had also reopened its PPP lending facilities after the federal government extended the program.

The bank has placed renewed emphasis on corporate philanthropy in recent months as CEO Charlie Scharf sought to refresh the company culture in the wake of the ‘fake accounts’ scandal.

In March, it announced a planned investment of up to $50 million in minority depository institutions to help support economic growth in African American communities. It also donated $185 million to organizations including Feeding America and housing and healthcare charities, as well as its own WE Care Fund to support employees in financial hardship.