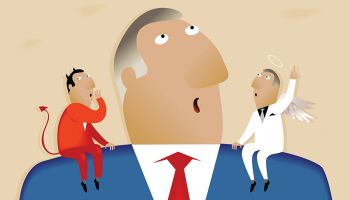 When analyzing companies such as Enron and Worldcom as well as the financial industry it is interesting to see how unethical business practices can begin by attempting to work within the bounds of the law or at least the most liberal interpretation of the law.

While it may be true that the banking industry had minimal criminal convictions after the 2008 crisis, it is equally true that some of the unethical business practices were not actually covered by the law.

Much of Goldman Sachs’s practices such as increasing the value of shares at an IPO beyond fair value were perfectly legal. Only after working in the gray areas did most of these executives or institutions go even further and engage in blatantly illegal business practices.

There are several things that corporate citizens, government and corporations can do to help to encourage better ethical standards, and it will take a blend of stronger and clearer laws along side voluntary initiatives that not only encourage a more responsible business community, but it also can enhance the brand image of the corporations.

Continue to Standardize All Accounting and Reporting Practices

Without having to go too far into ethical practices beyond following the law, it seems that many of the problems that were caused by top level executives at companies such as Worldcom and Enron came because they initially looked to be as loose as possible with earnings reports as the law could possibly allow. At the time, this included revenue earnings for instance, of the future value of present business contracts where it was difficult to gage if this was actually in violation of the law.

In some cases, the executives were not even convicted because it was not very clear if the laws covered unethical and deceptive reporting. The ambiguity of the law not only encouraged people to stretch the limits of legal accounting practice, it gave them the confidence that they could actually violate the law indiscriminately without getting caught. Banking Exchange recommends the following changes that should be advocated by corporate citizens.

Professionals in the financial services industry still have so many potential ethical dilemmas regarding how they are paid. The example of Wells Fargo’s employees being encouraged to rigorously cross sell a number of different products was a great example, but there are others as well. In the 401K industry, for instance, there are what are called Plan Advisors that instruct companies on setting up defined contribution plans. They have historically been paid basis points on the mutual funds for the funds that sit on a 401K platform for employees. The plan advisors would get a higher fee if they recommended one fund over another even if those funds could be seen as reasonably equal in reliability to lower paid funds. Index funds, for instance, that carried little or no basis points would be less desirable for a plan advisor to choose even though over a long period of time the fees associated with these funds would save the investor several thousand dollars. This has resulted in a number of lawsuits not only toward the advisor, but also for the companies that have been accused of being negligent in offering these investments to their employees.

Government policies are steering this group of professionals into a fee for service model so that while the advisors may not be paid as much for their service, they are paid a flat fee by their clients and thus free to make an objective decision on investment strategy. In as much as this can be encouraged in other areas of investments such as mortgages and IPOs, it is important that citizens as well as the government push for best practices in this area.

While faith based universities and schools tend to have classes focused on doing the right thing, public and private undergraduate universities rarely have any required classes focused on some of the basic principles of abiding by the law, integrity and other universally accepted ethical standards. The schools all have a code of conduct that students need to live by such as cheating and plagiarism, but this is not teaching ethics beyond rules and regulations.

Banking Exchange believes this is due in part to a sense of relativism and a hesitancy to acknowledge there are universal principles of right and wrong. However, if a school’s responsibility is to prepare college students, schools should take the responsibility of encouraging a strong ethical foundation as an integral part of success in any field the students choose to go into. Banks can inform universities that they are looking for future employees that have this background. It may be the most critical time in a person’s life to think about these things before they enter into their chosen field.