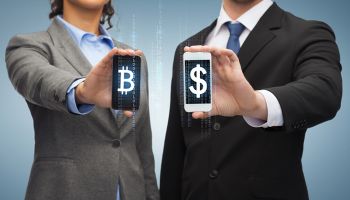 Approximately 13 million bitcoins, worth approximately $4.5 billion, exist today. As the use of bitcoins spreads, lenders will increasingly encounter borrowers that own bitcoins. Lenders who do not understand this virtual currency and the unique risks associated with it could expose their banks to undue risk.

How do you adapt to this new store of value without such exposure? This article provides bitcoin information that lenders and their counsel need to know in order to properly mitigate the risks associated with not just borrowers that own bitcoins, but also borrowers that do not own bitcoins but could in the future purchase bitcoins and thus change significantly the credit risk they represent.

Bitcoins are a form of virtual currency, like cash on the internet. Some essential facts to understand:

• Each bitcoin is comprised of a public address and a private key.

These two elements are all that is necessary to sell or transfer the bitcoin, so keeping them confidential is critical.

• All bitcoin transactions occur online and are recorded in a public ledger maintained on computers all across the world.

This public ledger is called the “blockchain.”

All bitcoin transactions ever made are recorded in the blockchain.

5 areas of risk to guard against

Lenders need to be aware of the credit risks associated with any borrower that owns bitcoins or may in the future purchase bitcoins.

1. Volatility of the value of bitcoins.

And the volatility is not just evident over days and months. Significant value changes can occur throughout a single day. In fact, in one day the value of a bitcoin can rise or fall by 20% or more.

Unlike most currencies, as mentioned, the bitcoin is not backed by a central bank or government. Beyond this, nor is any central authority managing the value of bitcoins. The value depends upon the trust and confidence of those using it. If everyone decided not to accept bitcoins one day, due to a major cyber attack incident, government restrictions, or otherwise, then bitcoins could lose significant value very quickly.

And the low volume of transactions and limited acceptance heighten this volatility. Lenders must account for such volatility in making credit decisions about the value of bitcoins as collateral and whether to allow borrowers to purchase bitcoins.

Various highly publicized episodes over the last year or so have subjected bitcoin commerce to peril.

Commentators point to the shutdown of the Silk Road online marketplace last October (and the associated loss of $2.6 million of bitcoins that Silk Road had held in escrow); the money laundering charges levied against Silk Road; the Sheep Marketplace scam last November (with respect to which $6 million of bitcoins were stolen); cyber attacks in which bitcoins were stolen from wallets of customers of various bitcoin exchanges; the fall this year of what was previously the largest bitcoin exchange in the world (Mt. Gox) after bitcoins worth approximately $450 million were stolen; and the closing of Flexcoin, a bitcoin bank, after hackers stole bitcoins worth approximately $600,000.

In a recent study it was determined that 45% of all bitcoin exchanges end up failing.

Such developments underscore one of the most significant exposures related to bitcoins that every lender needs to understand: the risk that more bitcoin exchanges and bitcoin banks will fail. If that happens then the bitcoins at those institutions will likely be irretrievably lost forever.

Critics also point to the refusal of most banks to accept bitcoin transactions.

Especially in light of the events described above, it is appearing more and more likely that governments will step in to impose regulations and restrictions on the bitcoin industry.

Notably, the European Banking Authority has advised European banks not to deal in virtual currencies until regulations are in place.

Brazil, Israel, Hungary, and India, among others, have issued warnings to the public about the risks associated with the bitcoin industry, particularly in the areas of volatility, fraud, and theft.

And in the U.S., there is ongoing debate by regulators regarding potential regulations affecting bitcoins.

Lenders need to be aware that governmental restrictions and regulations already exist and that more are on their way. We don’t know what the restrictions will look like nor when they will be imposed. This uncertainty in the regulatory environment should be factored into credit decisions regarding bitcoins as collateral and whether to permit borrowers to purchase bitcoins in the future.

4. The risk of cyber attack on bitcoins.

This virtual currency can be stolen in a variety of ways, including if the thief obtains the private key associated with the bitcoins, mentioned earlier.

Once stolen, there is very little that the owner of the bitcoins can do about it. Bitcoin sales are irreversible and, for the most part, anonymous. There are numerous reports of bitcoins being stolen from wallets on bitcoin exchanges. In some cases the bitcoin exchange refunds the customer, but they have no obligation to do so.

Often it is not the bitcoin exchange’s system that was at fault when a customer’s bitcoins are stolen. Instead, the customer had failed to implement the necessary security settings to protect their wallets.

There is no insurance to protect an owner of a bitcoin the way someone is protected if their car is stolen. And there is no FDIC insurance such as with bank accounts. Lenders should discuss the measures that bitcoin-owning borrowers have taken to protect their public address, private key, and bitcoin wallet generally.

5. The difficulty of exercising remedies after a default.

In the case of traditional money being held as collateral in a bank account, a lender can send a notice of exclusive control and stop the borrower’s access to the account.

In the case of equipment collateral, a lender can foreclose on the equipment.

However, with bitcoins, it is not possible to put a control agreement in place and if the borrower transfers the bitcoin to a third party it would likely be impossible for the lender to learn the identity of the transferee and obtain possession of the bitcoins or realize on the value of the bitcoins.

In theory, the lender might obtain a court order against the borrower, but it is possible that not even the borrower knows the identity of the transferee due to the anonymous nature of bitcoin sales.

When bitcoins are held by a lender as collateral it may be prudent to require that the public address and private key be held in escrow. This would enable the lender to access them upon an event of default. Creating such an escrow adds an element of risk that the public address and private key could be stolen from escrow, but the escrow provides a means for the lender to realize upon the value of the bitcoins.

If an escrow is not desirable or practical, then a lender should consider including covenants in the loan documents requiring the borrower to:

(a) convert the bitcoins to cash and forward the cash to the lender upon an event of default, and/or

(b) provide the public address and private key for each bitcoin.

However, even with such covenants, if the borrower refuses to comply after an event of default then the lender’s only alternative is to obtain a court order.

The rapid expansion of the bitcoin system has created an interesting challenge to a variety of industries that need to integrate this relatively new and unique virtual currency network into existing, traditional frameworks. This is particularly evident in the case of the means of perfecting a security interest in bitcoins.

There is no specific provision in the Uniform Commercial Code that specifies how to perfect a lien on a bitcoin, so we must use the existing framework and terminology to determine the best answer to the question.

Bitcoins are general intangibles under UCC. Therefore, in order to perfect a lien in bitcoins a creditor must file a UCC-1 financing statement with the applicable state. One might think that bitcoins are “money” under the UCC, but bitcoins do not meet the UCC requirements to be considered “money” because they are not authorized or adopted by a government.

Also note that under the UCC a secured party can obtain a lien on a deposit account in which money is held, but bitcoin wallets do not meet the definition of “deposit account” under UCC because they are not maintained with a “bank.” Bitcoins also do not fit any of the categories of “security” under UCC.

There are several steps lenders can take to address the risks associated with bitcoins.

• Ask for relevant data. Require the borrower (prior to entering into the lending arrangement) to tell the lender (usually in a “perfection certificate” or similar document) whether they own bitcoins—or any other virtual currency—how many, and where they are held.

• Obtain security strategy. Ask the borrower about the security measures in place that protect their public address and private key, in the case of bitcoins, or other applicable information in the case of other virtual currencies.

• Arrange a notice requirement. Add a covenant to all loan documents requiring written notice of all virtual currency transactions and such information related thereto as requested by the lender.

You’ll want to obtain prior written notice, if possible, in light of the circumstances of the specific deal. Points to include are the amount of virtual currency involved, the price, the location of the newly acquired bitcoins, and the security-related questions associated with the public address and private keys.

• Address the risks specifically. If virtual currency is a significant part of the collateral, consider adding events of default related to the following:

• Any cyber attack targeting borrower’s virtual currency or the public addresses, private keys, digital wallets, or other applicable critical aspects related thereto, in an attempt to steal, alter, or destroy any of the above.

• Any material decrease in the fair market value of borrower’s virtual currency.

Understanding these bitcoin issues—and issues related to all virtual currencies—is important whether or not you are relying upon bitcoins or any other virtual currency as collateral at this time. Even if your borrower does not own any bitcoins now, mitigation of the risks associated with bitcoin ownership is important.

Bitcoin ownership in itself might not be a problem, but assessing and controlling the credit risk related to bitcoin ownership is critical. Nobody knows what the future holds for the bitcoin industry, but prudent lenders will be acting proactively to assess the risks and take the necessary steps to mitigate the risks before a bitcoin-related problem occurs.

David Lawson chairs the Commercial Lending Practice Group at VLP. He represents financial institutions in a wide range of financing transactions, including structuring, preparing, and negotiating loan documents in connection with secured and unsecured credit facilities, loan workouts and restructurings. He represents a prominent tech lending bank on issues associated with bitcoins as collateral and mitigating the risks of lending to bitcoin exchanges. He recently closed a $20 million credit facility to a bitcoin exchange.