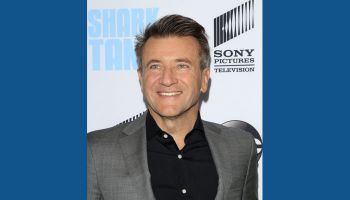 “An absolute concept in the technology business is, if you’re not comfortable with change, you probably shouldn’t be in the business. Because the world doesn’t wait for you to be comfortable”—Robert Herjavec

How does a guy who runs a multi-million dollar cybersecurity business and stars on two popular T.V. shows also have time to drive race cars and give speeches at trade shows?

Short answer: He’s a high-energy guy—and he doesn’t sleep much.

Robert Herjavec, CEO of the Herjavec Group, says that in the case of Shark Tank, the hit ABC show on which he’s a star, the entire year’s production takes place in about two weeks. Dancing with the Stars, on the other hand, takes much more of his time.

As for running his cybersecurity business, he had this to say in a presentation at the Finastra Perspectives conference earlier this year:

“An absolute concept in the technology business is, if you’re not comfortable with change, you probably shouldn’t be in the business. Because the world doesn’t wait for you to be comfortable.”

He cited a point made by IBM CEO Ginni Rometty: “Either you’re changing by choice or one of your competitors is going to force you to change. Growth and comfort do not exist in the same sentence.”

Herjavec added that when you’re small, you’re motivated, because “you’re going to change the world.” But what happens?

“As we get older and our companies get bigger and we become more successful, we want comfort,” said Herjavec. “It’s human nature. The problem is, there is somebody out there—a competitor—that isn’t thinking about comfort. They’re thinking about you.”

Every time he walks into his office at Herjavec Group, he said, he sees a saying from fellow “Shark,” Mark Cuban, engraved on a plaque: “Every day, somebody wakes up with the sole intention of kicking your ass.”

It’s true, he said, recalling that when he started his first company he would think, “I’m going to take those guys on.”

Why the internet will cease to exist

In his presentation he spoke about how quickly the auto industry has changed. The only industry in the world changing faster is technology. Nothing moves faster than technology.

“Within three years,” he continued, “the internet will cease to exist. It will be electricity. The only way it will be noticed will be by its absence, like the lights being off.”

Herjavec provoked nervous laughter when he said the idea of saying “I’m going online” will make you sound old. “There’ll be a generation of people who won’t understand you when you say, ‘I used to have a modem,’ or ‘I had to look for a Wi-Fi connection’.

“We can’t stop the advance of technology,” said Herjavec. “We simply have to take advantage of it and figure out what our customers will want.”

The reality is, he added: “Every company in the world today is a technology company.”

Herjavec told the of story of setting up his second security company (Herjavec Group) after selling his first and confidently predicting first-year sales of $5-6 million.

Six months went by. The company had sold … nothing.

“Customers loved to meet with me and have lunch,” said Herjavec. “The sales team was saying, ‘Don’t worry, people love the relationships we’re building. Look at all the lunches we’re having. This is how it’s always been done’.”

So he went to a customer and asked why he wasn’t doing business with Herjavec Group. The customer replied, “Robert, you’re great, you’re engineers are great. But, you know, we’re dealing with Bob and Bob’s okay—he’s good enough. When he makes a mistake, I’ll give you a chance.”

That’s a business built on hope, Herjavec thought. Which led to this epiphany: No customer will leave “good enough” for “potentially better.”

“Our value proposition wasn’t strong enough,” said Herjavec. “So we changed everything.” It took the company five years to get to $5 million. But in the next five it grew to $100 million, and to $200 million in the last three.

Addressing the qualities of success, Herjavec, who has bought many companies as well as building his own, said, “The consistent quality of good companies is energy. There is no physical type or characteristic for success. But I’ve never met a successful person who is negative and doesn’t have energy about what they do. If you don’t believe in yourself and have the energy to grow, you’re going to have a really hard time.”

Often asked about the keys to success, Herjavec, in addition to mentioning his latest book [You Don’t Have To Be A Shark], also says that after nine years of doing Shark Tank, the one thing that stands out is people’s relationship with risk. The average person associates risk not with opportunity but with fear, he said.

Herjavec described how some people tend to look at taking a leap of faith in order to succeed. “We sharks think that’s stupid,” said Herjavec. “Why jump off a cliff if you don’t know how deep it is at the bottom? Walk down, put your foot in the water and see how deep it is, then take the leap. It’s about controlled risk.”

But most people don’t take the risk, he said. They decide to wait for the door to opportunity to open.

To that, Herjavec comments: “The only commodity we all have equally is time. Everybody comes from different circumstances, but the great equalizer is time. Everybody has 24 hours a day—from the CEO on down. The key is, what do you do with that time? If you want to get ahead, you have to work harder and get more out of that time. I sleep an average of three to four hours a day. Why? Because I’ve got a lot of stuff to do.”

He often hears people say in response, “I wish I could do that,” to which he replies, “I’m making a conscious decision to sleep three to four hours. Do I want to sleep more? Absolutely! Am I exhausted? Absolutely! But I’d much rather be tired than poor.”

Herjavec’s advice on getting ahead: “Don’t wait for the door [to opportunity] to open for you, because it’s all up to you.”

Be hard on yourself, for a purpose

He said the scariest thing he’s ever done was Dancing With The Stars—especially his first appearance with Kym Johnson [his professional dancing partner, whom he subsequently married] on the live show.

But he concludes: “I think the more success you have, the more discomfort you have to add to your life. One of my favorite sayings is: The harder you are on yourself, the easier life will be on you.”

During his presentation, as he has done elsewhere, Herjavec spoke about how he has been motivated by his father, who fled Communist Yugoslavia with his wife and son, eventually settling in Canada, where they lived in the basement of a relative’s home for two years with practically no money and not even speaking the language.

Herjavec described how after many years his own success enabled him to buy his father the Cadillac he had always wanted.

“That’s why you get up every day at 4 a.m.,” he said, “you have a purpose. I don’t care if it’s a Cadillac. There’s a greater purpose why you wake up every day—not to just exist, but to do something great with your life.”

More in this category: « Is AI ethical? Checking out an Amazon Bookstore »
back to top