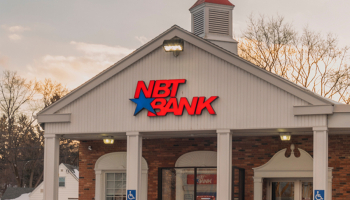 The deal will add Salisbury’s $1.5 billion of assets, $1.3 billion of deposits, and $1.2 billion of net loans to NBT Bancorp’s balance sheet. It will also expand its branch network with 14 locations across north-western Connecticut, New York’s Hudson Valley region, and south-western Massachusetts.

Subject to regulatory and shareholder approvals, the transaction is expected to complete in the second quarter of 2023. Salisbury branches will then be rebranded as NBT, and a regional operations center is planned, expected to be located in Lakeville, Connecticut.

Richard Cantele Jr, president and CEO of Salisury Bancorp, is to join NBT’s executive management team, and one Salisbury director will join NBT’s board following the transaction.

Cantele said the deal would “create significant value for Salisbury shareholders, both immediately and longer term” and bring “an expanded set of products, services and capabilities” to Salisbury’s customers.

NBT’s president and CEO John Watt Jr added that Salisbury had “attractive and complementary markets” to his bank’s footprint.

Elsewhere, Middlefield Banc Corp has completed its $64.4 million merger with Liberty Bancshares, first announced in May.

Ronald Zimmerly, former president and CEO of Liberty, has joined Middlefield as president. Middlefield now has 22 locations across Ohio, and assets of more than $1.7 billion.

The transaction is now expected to be completed in January 2023.

Separately, two North Carolina-based credit unions have received member approval for a planned merger. Skyla Credit Union and Parsons Federal Credit Union will officially merge as of January 1, 2023, according to a statement.

The deal will grow Skyla’s footprint to 19 locations, adding branches in California and Virginia. The combined company’s total assets will be approximately $1.4 billion.