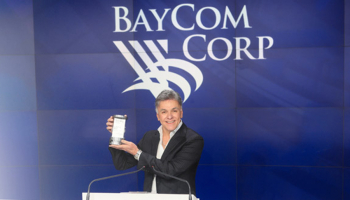 PEB specializes in commercial and consumer loans to small and middle-market businesses in Orange County. In a statement, BayCom said the deal would boost BayCom’s presence in Southern California.

Upon completion of the transaction – expected in the first quarter of 2022 – the combined company will have $2.9 billion in total assets, a loan book worth $2.1 billion, and a combined $2.4 billion in deposits.

Rajib Das, chair of both companies, said the acquisition would bring additional capital to the Georgia-based bank to boost its capital base as well as improving its leadership team.

Rochelle would also invest to improve its online banking portal and introduce a new mobile banking service, according to a statement announcing the deal.

Aiia has connections to more than 2,700 banks across Europe, serving businesses, consumers, and banks. Its platform allows businesses and financial institutions to integrate financial data and account-to-account payments.

The acquisition will allow Mastercard to deliver credit decisioning and credit scoring applications of Finicity to European clients, the company said.

The transaction is expected to close by the end of this year.