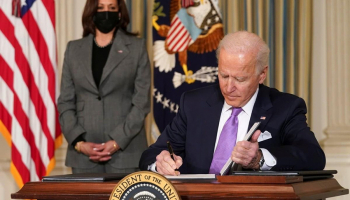 Merger and acquisition activity in the banking sector will come under greater scrutiny following an executive order signed by President Joe Biden.

Regulators including the Department of Justice (DOJ) will be encouraged to update guidelines for banking mergers and to provide “more robust” scrutiny of these deals.

As part of a wider executive order designed to promote better competition in the US economy, the Consumer Financial Protection Bureau (CFPB) is being directed to issue rules allowing customers to download their banking data.

Over the past 40 years, M&A has led to a 70% decline in the number of banks across the US, which research has shown has restricted access to banking services for some communities.

The executive order identified “excessive consolidation” as a cause of this decline with no bank mergers being federally denied in the past 15 years.

Biden is also using the order to establish a White House Competition Council to monitor implementation of these measures.

Other sectors, such as technology and agriculture, are also being addressed by the order, which calls on the DOJ and Federal Trade Commission (FTC) to enforce antitrust laws “vigorously”.

When announcing the order, the president said: “We’re now 40 years into the experiment of letting giant corporations accumulate more and more power and what have we gotten from it?

“Less growth, weakened investment, fewer small businesses. Too many Americans who feel left behind… The executive order I’m soon going to be signing commits the Federal Government to full and aggressive enforcement of our antitrust laws. No more tolerance for abusive actions by monopolies. No more bad mergers that lead to mass layoffs, higher prices, fewer options for workers and consumers alike.”

Some of the biggest banking M&A deals of the past 18 months include: PNC’s $11.6 billion acquisition of BBVA USA; Huntington’s $6 billion purchase of TCF Financial; and the $5.1 billion merger of Sterling Bank and Webster Financial Corporation.

This is the latest move from President Biden’s administration that signals a move away from the Trump regime’s approach, which had adopted an industry-friendly and M&A-accommodative stance on regulation.

Earlier this year, the Department of Labor confirmed it would not be enforcing a controversial pension rule that many argued would restrict ESG investments.