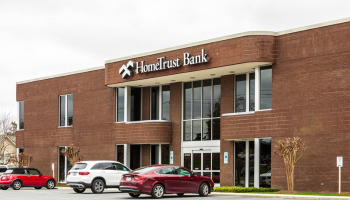 HomeTrust said in an announcement this week that the closures would affect locations in North Carolina, Tennessee, and Virgina, totalling 22% of its branch operations. It expected to incur a $1.5 million cost for employee redundancies, disabling an operating lease, and writing down facilities costs, among other costs directly related to the closures.

Affected customers would still be able to access its digital offering and remaining network of 32 branches.

“These strategic initiatives, along with the continued maturity of our diversified lines of business, will move us forward in achieving higher profitability and creating additional shareholder value in the near term,” said Dana Stonestreet, chairman, president, and chief executive officer.

On June 14, HomeTrust Bank paid off an outstanding $275 million loan from the Federal Home Loan Bank, incurring a $19 million pre-tax prepayment penalty. The loans carried an average interest rate of 1.81% and maturities ranging between March and November 2028.

From July 1, 2021, the bank intends to bring its small business loan service in-house, which would grant the bank fees and gains on sale income, it said.

The closure announcement comes amid a period of digital transformation of traditional banking models.

A report by S&P Global revealed the number of US bank branches to close during the first year of the pandemic reached 3,324. Among them was Chicago-based Byline Bank, closing nearly 11 branches - 20% of its network - in the final quarter of 2020.