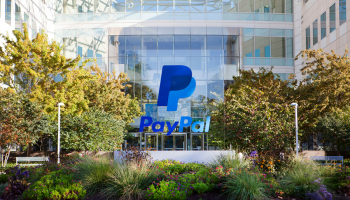 Online payments specialist PayPal is now the biggest non-bank lender after experiencing a boom in demand for services through the Covid-19 pandemic.

The former eBay subsidiary has more than $54 billion in assets, according to research by TradingPlatforms.com.

PayPal has seen its share price climb by 170% in the past 12 months, according to Bloomberg, and was up by nearly 230% in the 11 months to February 16, before the recent drop in tech company shares.

The company offers business loans through a partnership with Utah-based WebBank. The partnership has also enabled PayPal to participate as a lender in the Paycheck Protection Program.

The group’s revenue increased by more than 20% year-on-year to nearly $20.5 billion, while its payment volumes grew by a third to $936 billion.

It also processed a record number of transactions – 15.4 million – marking a growth of 25% year-on-year.

According to TradingPlatforms.com, non-bank lenders have become an increasingly important part of small business funding as “traditional” banks tend to have stricter lending requirements.

The combined market capitalization of PayPal, Visa, Mastercard, and Square – the four biggest payment companies in the US – hit more than $1 trillion at the end of 2020, eclipsing the $880 billion total value of the traditional “Big Six” US banks (JP Morgan, Bank of America, Citigroup, Morgan Stanley, Goldman Sachs).

The rise of PayPal and other fintechs reflects the growing challenge of digital-based companies to the longer-standing banks.

JP Morgan CEO Jamie Dimon highlighted this challenge in a call with analysts in January, saying regulated banks were at a disadvantage compared to fintechs due to varying regulatory regimes.

Dimon said some fintechs earned considerable revenues by charging fees for debit card transactions that banks were prohibited from levying.

Under the Durbin Amendment, regulated banks are limited in the fees they can charge merchants each time a consumer swipes a debit card at the checkout.