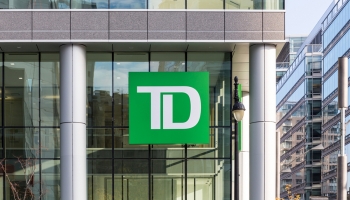 The US arm of TD Bank has reached a $122 million settlement with the Consumer Financial Protection Bureau (CFPB) relating to violations of the Electronic Fund Transfer Act.

According to a notice from the CFPB, TD Bank charged customers overdraft fees for ATM and one-off debit card transactions “without obtaining their affirmative consent”. It also misled customers about the features and charges related to its Debit Card Advance service.

The bank has agreed to pay restitution to more than 1.4 million clients, totalling $97 million. In addition, TD Bank is to pay a civil penalty of $25 million as well as take action to stop similar breaches in future.

Describing the breaches, the consumer regulator said TD Bank had “deceptively claimed” that its Debit Card Advance service was a free feature that came with new checking accounts. In fact, the service was optional and charged $35 per overdraft transaction.

Phone sales described the Debit Card Advance offering as covering transactions that were in actuality unlikely to be covered by the service.

The bank also interfered “materially” with consumers’ “ability to understand” the terms and conditions of the service, the bureau said.

The breaches took place between 2014 and 2018, in TD Bank branches and other “offsite events”.

Greg Braca, CEO and president of TD Bank, said he disagreed with the CFPB’s findings but was keen to move on from the episode.

“At TD, we put our customers first and our business is built on a foundation of ethics, integrity and trust,” Braca said.

“Throughout the period in question, TD had a clear process to secure formal consent before providing this service to customers, enabling them to make an informed and conscious choice.

“Prior to this settlement, TD had already voluntarily and proactively implemented enhancements to our Debit Card Advance disclosure and enrollment processes beginning in 2014.

“Although we disagree with the CFPB’s conclusions, we have cooperated fully to resolve this matter and are moving forward with a continued focus on meeting the needs of our customers.”

TD Bank has agreed to make further changes to its enrollment processes, overdraft notices, and policies and procedures to ensure compliance with consumer-related financial rules. However, it has not admitted to any wrongdoing in the settlement, and stated that intended to continue to offer the Debit Card Advance service as an optional extra feature for its checking accounts.

The dispute between TD Bank and the CFPB follows a similar disagreement in February between the bureau and Citizens Bank.

The CFPB accused the Rhode Island-based bank of a series of failures in relation to credit card disputes.

The bank said it would “vigorously challenge” the regulator’s action.