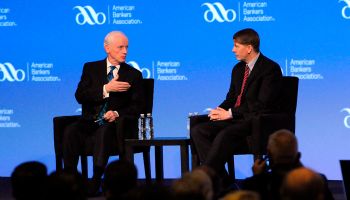 Bankers gathering at ABA’s Annual Convention in New Orleans earlier this week to hear Richard Cordray speak had many of the “usual suspects” on their minds—the “ability-to-pay rule”, qualified mortgages, the overall regulatory burden.

They heard a great deal on these matters—some of it sobering and some of it somewhat encouraging.

But Cordray, director of the Consumer Financial Protection Bureau, also reminded them that the agency and America’s banks share some common ground: No one wants to see the American consumer get hurt.

What kind of productive citizen can a consumer be, asked Cordray during a Q&A session with ABA President Frank Keating, if he or she goes bankrupt, or loses their home to foreclosure?

This came in the wake of a speech Cordray gave that stressed the need for consumer financial literacy training, which he believes should be required as part of every child’s schooling. He criticized the 37 states that have no financial literacy requirement for their schools.

“As the financial marketplace has grown more complex, we have made an enormous mistake in this country by not placing a consistent and sustained emphasis on financial education,” said Cordray in the speech. “Every year, we send thousands of young people out into the world to survive on their own, with little or no training in the kinds of decisions they must make to succeed financially.”

Cordray said that this is a “self-defeating approach in any free society ordered around a free market economy, and we simply have to face up to our current failures and insist on doing better—in our schools, in our workplaces, and in our houses of worship.”

ABA continues to urge bankers to write to their representatives in Congress to support an extension from the January 2014 effective date for most of the new mortgage regulations finalized back in January by CFPB. However, Cordray left little doubt that, so far as the Bureau is concerned, there will be no extension.

He spoke of the intense efforts of his bureau’s staff to produce the regulations by last January, and pointed out that in the absence of the rules, including carveouts for community banks that were not in Dodd-Frank, the industry would already be under the law’s revised mortgage regime.

“So you already would have been living under those provisions for quite some time, with no guidance to resolve ambiguities and subject to whatever interpretations the courts might eventually arrive at through litigation,” said Cordray.

Early in the Q&A session with ABA’s Keating, Cordray expressed surprise that some community bankers still don’t know that their mortgage lending comes under the Bureau’s rules. While CFPB directly examines larger institutions under typical circumstances, it can examine any bank, and all insured banks fall under its mortgage regulations. The Dodd-Frank Act moved some key consumer regulations to the Bureau, as primary regulation-writer in those areas.

To make things completely clear, Cordray said, CFPB has put together a single-sheet guide to the qualified mortgage concept. Stacks of these were made available at the Annual Convention.

Cordray pointed out that CFPB has been actively reaching out to the industry to assist with implementation of the new regulations, and providing many tools on its website. He noted that, having gone through the process of producing all the new rules quickly at the Bureau, he understood the industry’s own anxiety about being ready on time.

He promised a degree of forbearance, though he didn’t use that word specifically. What he did say was: “We are all in this together, and so we appreciate the urgency that is being felt and the resources that are being mobilized to prepare for the approaching effective dates. Let me also assure you that our oversight of the new mortgage rules in the early months will be sensitive to the progress made by institutions that have been squarely focused on making good-faith efforts to come into substantial compliance on time—a point that we have also been discussing with our fellow regulators.” [Emphasis added.]

ABA’s Keating pressed this point further in the Q&A, pointing out that bankers worry about being technologically ready, and are concerned about whether their vendors will be able to support them in readiness.

Cordray said vendors have assured CFPB that they will be ready in time for the January deadline. And he reiterated that the agency will be understanding early on: “If you’re making good-faith efforts to come into compliance and are pushing your vendors, we’re not going to expect perfection.”

Some banks have indicated that they will drop all non-QM lending, to avoid stepping out of the “safe harbor” that QM provides. Cordray said he believed that it would be “a bad business decision” to stop making good non-QM loans.

Regulatory burden and the Bureau

Even before its launch, the Bureau was a lightning rod for banker anger, and many continue to point to it as a favorite example of regulatory burden. ABA itself has taken the position that it is more productive to work with the Bureau than to oppose its existence.

Cordray and Keating noted during their interview that the ABA leader and other association staff members frequently meet with CFPB staff.

Cordray said he was very concerned that his Bureau’s rules not drive added bank consolidation. He believes dialog with groups like ABA can prevent that. More specifically, he said CFPB did not wish to upset community banks’ relationship lending model.

One important point from Cordray’s speech involved recognition that consumers bear some responsibility for what happens to them financially.

“Consumers need to put themselves in position to make sensible decisions that they can live with over the entire course of their lives,” Cordray stated. “They need to recognize that the best form of consumer protection is self-protection: avoiding problems before they occur and the damage is done.”