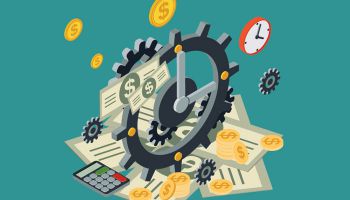 This is the first in a series of reports from Future Forces In Banking 2018. The study is a collaboration between CS Consulting Group, CenterState Bank, and Banking Exchange.

In a recent interview with Banking Exchange, KBW Managing Director and mid-cap bank analyst Collyn Gilbert observed that many banks have been slow to take up technical innovation. She likened the industry to changing course more like a 1,100 foot aircraft carrier than a patrol craft—i.e., it’s gradual.

A recent survey of community banks and savings institutions exploring the changes impacting the industry and its response to them, confirmed Gilbert’s observation.

Asked how ready their institution is for future conditions in banking, exactly two thirds of the 270 respondents selected this response: “We will need new strategies, lines of business, and methods to compete effectively.”

Another 13% were even more emphatic: “A significant transformation of our business model will be required.” (See chart.) 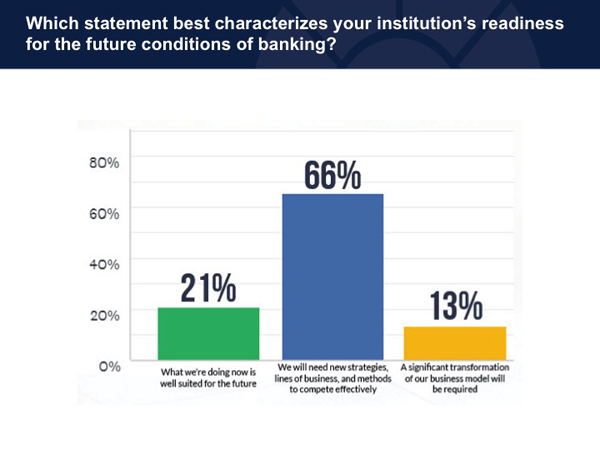 Taken together, that’s an overwhelming 79% of bank leaders saying they need to significantly change their institution in order to better compete going forward.

The survey asked what tactics institutions were employing to improve performance. The top three tactics cited were:

• “Differentiating by deepening relationships with customers” (80%)

• “Differentiate by becoming faster and easier to do business with” (58%).

The second and third points reflect the reality that banks now compete against agile nonbank “disruptor” companies in online lending and other areas. Such competitors’ time to market is often a fraction of that of most banks, and they offer very simple user interfaces.

In regard to online-only lenders such as OnDeck and Prosper, 68% of respondents say they are currently losing business to these nonbank players—some considering them a “real competitive threat” and others a “niche competitor.” This figure is up slightly from 61% in the 2015 survey.

Looking ahead five years, the percentage of respondents who anticipate losing business to online lenders and other disruptors jumps to 81%, about the same percentage as in 2015. In both cases—current threat and threat five years out—the larger the institution, the more of a threat nonbank lenders are perceived to be.

The report’s co-authors add some color to these figures here.

In regard to the relatively unchanged percentages from 2015 to 2017, CenterState Bank’s Chris Nichols says, “Bankers have become more realistic since our last survey. Some of the hype has been replaced by knowledge, making non-bank, technology-driven competitors less formidable.” Nichols is chief strategy officer at the $6.8 billion-assets bank, in Winter Haven, Fla.

Joe Cady, managing partner, CS Consulting Group adds that the data “reflect the fact that fintechs have yet to gain critical mass, beyond their current niche lending.” One exception is mortgage lending, where players Rocket Mortgage/Quicken Loans is now a top 5 lender.

Cady does point out, however, that the percentage of respondents viewing nonbank lenders as a real competitive threat (as opposed to a niche competitor) rose from 19% currently to 41% in five years. So there is significant concern among a portion of the industry.

Need to grow the bank

The bank executives surveyed overwhelmingly believe that it is important to grow asset size to a particular threshold in order to compete—85% saying it is either “somewhat important” or “critically important.”

The report notes that return on average assets at the largest institutions, on average, trails that of regional community banks, and there is other evidence to suggest that “scale” is achieved at a much lower threshold than supposed.

“As executives, we are taught that growth is a sign of health, which is true,” says Cady. “It is also much easier to get bigger than better as an organization.”

Cady maintains that if bankers focus on getting better as institution, growth will follow.

“In our industry, larger is often perceived as better,” adds Nichols. “If your return is above your cost of capital that is usually true. However, bankers often confuse asset size with gaining efficiency when unfortunately, this is often not the case.”

Don’t count us out

Despite the pace and degree of change the industry faces, more than eight out of ten respondents agreed with this statement: “Community banks and credit unions will be around for the long haul, although fewer in number.”

As the chart below also shows, 11% of respondents think community banks and credit unions will become “relics of the past” due either to fintech competition or big-bank dominance. 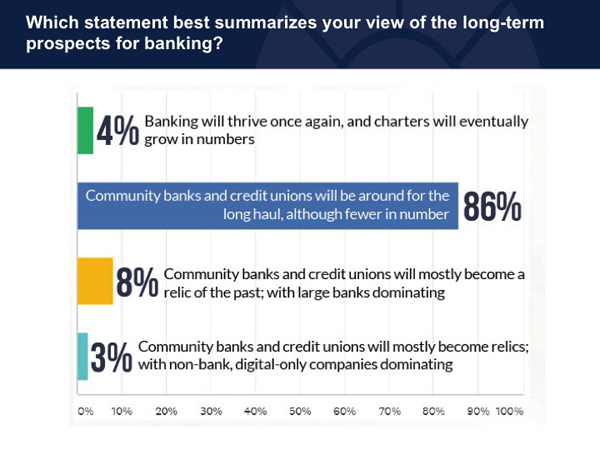 While that 11% figure might seem high, considering that 94% of the respondents were from institutions of $9 billion in assets or less, it’s actually an improvement from the 2015 survey when 25% of respondents thought community banks and credit unions would become relics.

So, while challenges remain, community banking leaders are actually more optimistic about their future now than three years ago.

Nichols goes so far as to refer to the current situation as a new “Golden Age of Banking,” a result of “lower but rising interest rates, improving credit quality, and improving efficiency driven by technology.”

Add to that evidence of real movement toward less regulation and “it has never been a better time to be a banker,” says Nichols. Passage of tax reform only improves the picture.

Cady is a little more circumspect.

“Regardless of bankers’ perceptions,” he says, “extrapolation of current trends show that large banks are trending towards a dominant share of the market.”

• “Branches and distribution channels in the future” (which also explores technology budgets and projects).

• “Regulation in the future.”

Subsequent articles will present highlights of these two sections.