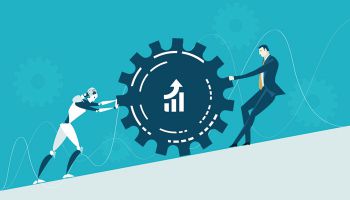 This is the third and final report from Future Forces In Banking 2018. The study is a collaboration between CS Consulting Group, CenterState Bank, and Banking Exchange.

Can banks stay up with changing times if their regulators don’t?

Some bankers might be quick to respond, “Of course,” and there are examples of innovative banks to support that.

Yet, in an industry as highly regulated as banking, it’s not an academic question. Especially when considering that many banks consider their own efforts to change to be coming up short so far.

In a recent survey, nearly eight out of ten bankers said they need new strategies, lines of business, or methods to remain competitive in a rapidly changing environment. That finding was reported in the first of three articles, of which this is the third, covering results from the Future Forces in Banking 2018 survey, conducted by CenterState Bank Correspondent Division, CS Consulting Group, and Banking Exchange.

Regulators up to speed?

It seemed relevant to ask the bankers for their view of how well their regulators are keeping up with the same dramatic changes that banks face.

As you can see from the pie chart, below, just over half of the 270 respondents (91% of them from banks, and most from banks of $9 billion or less) did not think regulators in general are keeping pace. 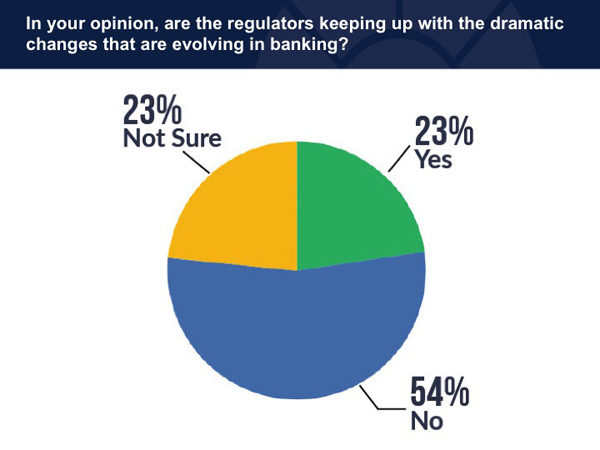 Naturally regulators may dispute this. Clearly state and federal agencies have taken steps to deal with the emergence of nonbank lenders and other fintech players. Nevertheless, about half of the financial institutions they regulate—based on this sample—have the perception that the regulatory agencies lag, while just under a quarter believe regulators are keeping pace.

Ironically one of the clearest indications of a regulator attempting to stay ahead of the digital curve, the fintech charter proposed by the Office of the Comptroller of the Currency in 2016, is not particularly liked (or understood) by many of the bankers surveyed.

Forty-four percent of respondents do not support the OCC’s fintech charter proposal, twice as many as those who do. The remainder of respondents (35%) weren’t familiar enough with the concept to weigh in.

The fintech charter was proposed during the term of Comptroller Thomas Curry. New OCC chief Joseph Otting said during a meeting with reporters in early December that the charter has a future but needs further study.

The changing of the bank regulatory guard had mostly not taken place at the time bankers were surveyed (mid November-early December 2017).

So it’s not surprising that most bankers at the time reported not seeing much, if any, change in regulatory scrutiny, as shown in the chart below.

In fact, nearly a third reported an increase in scrutiny based on their most recent regulatory exam. 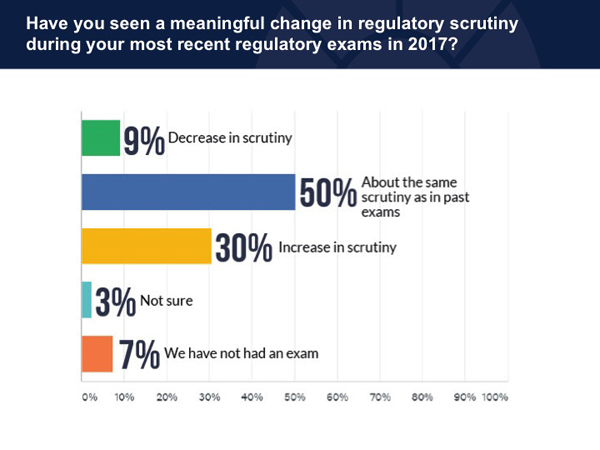 That said, there are now new faces at two of three prudential regulators (OCC and the Fed, with a new FDIC chief pending) and a significant change, albeit interim, at the Consumer Financial Protection Bureau.

The most significant impact of these personnel changes could come in areas relating to compliance enforcement rather than safety and soundness. Even so, the newcomers have already begun to affect the “tone at the top,” which should gradually trickle down to the front lines. The same question asked a year from now could show different results.

The survey asked this open-ended question: “What’s the biggest opportunity you see for you institution in the next three years?”

Summarizing the responses, the survey authors wrote: “Over the next three years, bankers see the largest opportunity centered on a strategy of implementing technology to drive operating costs down, and then using the more efficient platform to acquire less efficient institutions.”

Related to that, many bankers report being on the lookout for niche markets that are ignored as the industry continues to consolidate.

Finally, there were many comments about building the institution’s culture and increasing education for both staff and customers.

Read part one: “Community banks: ‘Yes we need to change’”