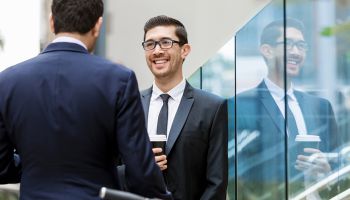 It takes a little while for all lenders new to the job to develop a personal “style” and technique. In the early days I was always number 2 on an account, so I watched how the more experienced lenders went about it. In time I had my own portfolio of business and wasn’t second fiddle. But imitating the techniques of others I soon learned that I had to find my own way and develop my own persona.

Rules of the road

I was well taught at The Bank of New York in several strict rules of conduct:

• We are a classy outfit and have high standards that include the personal demeanor of everyone on or off duty.

• Customers like to be called on in their places of business.

The list is longer than that. But these are some of the key points that I carried around as behavioral norms for the rest of my working career.

Some things, as one might imagine, might become exaggerated at a big and “fussy” company back in those conservative days. I recall that one of the vice-presidents in the trust department, a man in his early 40s, was a natty dresser. I was amused to learn from one of his neighbors who also worked for the bank that he was never seen without a coat and tie—ever. He even wore a jacket and tie doing yard work at his suburban New Jersey home.

But one technique that I came upon a little later served me better than any other. I always asked, “How’s business?”

And the question was not perfunctory. I was looking for an answer perhaps more in the form of an attitude revealed than specific information relating to specific metrics.

By consistently asking that simple question—and being perceived as genuinely interested in the answer—I was gradually amassing a store of useful information about a borrower’s specific business but also about the community—the C of Credit for “conditions.”

One day about 20 years ago my wife and I attended the Dallas wedding of the son of a customer as out of town guests. I was sitting at a “round of ten” (as I would describe it in my waiter days) next to the hairdresser for the bridal party.

I asked my usual question, “How’s business?” and got an amazing profile of the upper-middle-class social and business scene in Dallas. It was wonderfully detailed, not gossipy, and full of useful “indicators” of the business conditions from an entrepreneur’s vantage point.

From that day forward, I used every session in the barber chair to delve into my barber’s view of business as he understood it from conversing with his customers. What a store of information!

I even suggested that the barber start a newsletter and that maybe I could sell our marketing department into some sort of sponsorship of the letter. Nothing came of it, for the principal reason that the barber didn’t think he had anything useful to say.

Even though I’m retired from the active business of lending money, I’m still out and about with various activities dealing with for-profit and not-for-profit businesses. And I still ask, “How’s business?”

But I’m hearing something new in recent weeks that’s worth sharing.

Even in the face of statistically excellent business news, some participants are qualifying their opinions, hedging their bets in a way.

One man said just this week that he couldn’t figure out what was keeping everything afloat.

Another was grumbling about the complexity of the new tax law that he didn’t like—even though it put additional money into his pocket.

I thought about the offhand comment of a customer back in the late 70s, the period of stagflation and an 18% prime rate: “Business is lousy but everybody seems to be driving a new car.”

Then today, I read that the ten-year Treasury notes hit 3%. Rates are heading up. And while that’s great news longer term for our net interest margins, it also means that it’s starting to cost the Treasury more to service the large and growing federal debt.

The reason for concern is simple enough. As higher interest costs weigh on federal spending, it removes an increasing amount of money that could otherwise be used for productive purposes—capital investment and the like. That’s a longer-term economic depressant and with the wonders of compounding, adds significantly to the overall problem over time.

So, I sense a caution among my people who have been pretty reliable indicators of business sentiment . I see news in the form of higher interest rates that is both good and problematic to bankers and ultimately to everyone.

Does this mean that we should head for the storm cellar?

I don’t think so, but there’s one other abiding concern and that’s the level of personal distrust that’s creeping into how we evaluate the functioning of our government and major institutions.

I agree with that talking head who said on the nightly news this week that the events that will likely determine the outcome of the midterm elections haven’t occurred yet.

Instead of a period of relative business calm and optimism, there’s an element of foreboding. That’s what I’m thinking about as I ask, “How’s business?”

More in this category: « Roots of privacy debate began in banking Why bullying matters »
back to top

SRI and High Yield: Does it Work?