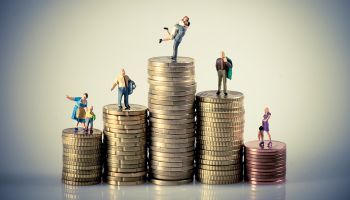 Reporter's Notebook is where Banking Exchange staff rise above the ordinary fray to get a perspective on what's going on. In this edition we discuss some community banking philosophy with bank consultant Neil Stanley.

Several times over the last year I’ve talked with banking services provider Neil Stanley about community banking strategy. He put some of his thoughts into an article that ran early this year just after the Federal Reserve began to raise rates, “Will ‘deposit atrophy’ strike your bank?” Most recently we began talking about deposit gathering, detoured into the nature of community banking today, and wound up with an important reminder. Here’s a summary.

“Demand for deposits is what economists call a ‘derived’ demand,” says consultant Neil Stanley. That is, he continues, if a community needs loans, then the community bank “factory” that produces loans requires deposits as the “raw material” to make the loans possible.

Where will those deposits come from when the surplus of the last several years is used up? Stanley, CEO of The Corepoint, and also recently named president of community banking for TS Banking Group, notes that brokered money now amounts to over 50% of time deposits held by banks these days. Sometimes banks can save a bit of cost over the local time deposit market going to the brokered market.  However, the potential loss of control over an important process should always be considered when anything is outsourced, says Stanley.

As loan demand grows, banks enjoying that phenomenon now may find themselves looking more closely at time deposits locally, Stanley says. There is a balancing act here, because just as the large depositor wants to maximize a safe return, the bank needs to watch its costs, and the impact of its actions on the local scene. Significant depositors have bloodhound noses.

“You have to find ways to attract funding while not poisoning your net interest margin by overpaying,” explains Stanley. This brings Stanley to another point he’s considered: Factors other than price that can influence a bank’s ability to raise funds locally.

What do you stand for locally?

Community banks need to be cautious about their assumptions regarding the potential of business from their connection with locals, warns Stanley. “Community banks often believe they have affinity with their community,” he explains, but how much depth there is to that connection will vary.

Community bankers like to refer to the trend to “buy local,” he says, but this doesn’t always work out in practice. Stanley points to neighborhood grocery stores as a potential parallel.

“Local grocery stores are beloved,” at least in concept, says Stanley, “but they are very much a dying breed.” People frequently buy with their heads, not with their hearts.

But while deposit pricing is important, Stanley says there are many nonfinancial factors that go into determining where consumers will put their deposits.

“People have choices today and they will make use of those choices,” says Stanley. “Ask what makes your bank the place that people want to do business with?”

Ultimately, what banks sell to their markets is “trustworthy liquidity,” says Stanley, meaning, the bank can be counted on to provide access to money, to always keep the credit window open.

But many little things can influence the perceptions that determine the nonfinancial side of the decision of where to place deposits—sometimes, the oddest things.

To illustrate this, Stanley refers to a bank he visited recently where handling one detail required the participation of three bankers and a typewriter. He says he can’t imagine that state of technological adoption impressing many potential or current customers.

“When I walk into a bank, I want to have a sense that they are managing things properly,” says Stanley. “Watching the bankers struggle with the typewriter negatively impacted my view of that bank. Why would I expect that these people could help me better manage money?”

Rethinking the value your bank delivers

Stanley says some bankers get this. As a result they work hard on the value proposition brought to depositors and others. Others, says Stanley, have yet to come along. He blames this on banking being, by nature, a business of tradition and status quo. Where nonbankers may see an opportunity in their industry and seize it promptly, bankers may hold back.

Why this lack of, well, spark?

Stanley’s own theory is that few people in community banks today “invented” that bank, that is, started it or helped to start it. Additionally, it is quite challenging to find a banker that invented any part of the process their bank uses today. The entrepreneur that opened the doors is gone, and those bankers remaining inherited an organization of a certain shape and size and “they tend to tightly hold on to and perpetuate what they’ve had in the past,” says Stanley. This can stymie entrepreneurial competition.

But let’s bring this back to deposits, especially larger depositors.

“You’re not a new depositor”

Stanley knows of a very large depositor whose bank was offering new large depositors a very attractive rate on savings, for these times: 0.80%, versus the 0.10% that the bank was paying that depositor.

This depositor, a long-time customer, had so much on deposit that the gain would be a very significant amount of money. She asked the bank to shift her funds to the higher rate.

“You don’t qualify,” Stanley says the bank told her. “This offer is only for new depositors.”

There is definitely an inertia factor in banking, but, again, this depositor’s account was large enough that 70 basis points mattered.

The depositor was deciding whether to go elsewhere, and what she decided is besides the point. How would your bank have reacted to her request?

Ultimately, Stanley says, bankers have to ask themselves who owns their deposit accounts: the bank or the depositor.

“You can’t take people like that for granted,” warns Stanley. “Someone else will quite happily snap them up.”

More in this category: « Fintech, ducks, innovation, and “unintended consequences” New products for security, credit research »
back to top

The United States has already surpassed $28 billion i...