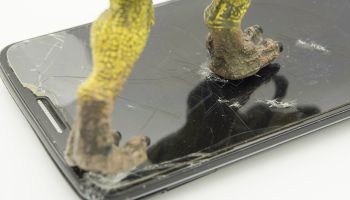 One side effect of the juggernaut of new technologies that bankers—and everyone—have to deal with is its propensity to engender new terms or co-opt old ones.

This can manifest itself in the form of entirely new words. Take “google” for example. According to the dictionary, it was coined in 2001 as a trademark name for Google, the search engine, and subsequently absorbed into common usage as the act of searching for something online. (Not to be confused with the word “googol,” which came into use early in the 20th Century and which denotes the figure 1 followed by 100 zeroes, or 10 to the 100th power.)

Other times, though, new technologies can confiscate an old word and give it new meaning. Take the word “steganography.”

It seems like you can go your whole life and never come across a word like steganography and suddenly, in one morning, you trip over it, twice, while scanning the latest technology literature. It is a real word and goes back to 1569 (again, according to the dictionary—the hardback book that gathers dust on a real-life bookshelf). It refers to the art or practice of concealing a message, image, or file within another message, image, or file. Who knew?

Today, though, it is being used to describe an increasingly nefarious cyber threat. What follows is a description of it, as well as a few other techno terms that have been, or may be, absorbed into common use.

Steganography—Researchers at Kaspersky Lab have found that malicious hackers are hiding messages inside digital images to conceal the tracks of their malware attacks on target computers. This practice has been dubbed “steganography” and works like this: Cyber crooks insert the information to be stolen right inside the code of a trivial visual image or video file, which is then sent to the command and control server. By doing this, they hide the digital signatures and coding that otherwise would be detected by current security analytics systems. Kaspersky Lab notes that, as of early August, the security industry has yet to find a way to reliably detect when stolen data actually gets into the criminals’ hands, or when it is “exfiltrated” in this way.

Steganography is again mentioned in a report by Accenture Security in late July that discusses “reverse deception tactics.” The report describes that term as “increasing cybercriminal use of deception tactics including anti-analysis code, steganography, and expendable command-and-control servers used for concealment of stolen data.”

Ominously, it adds: “Greater public reporting on cyber threat activity and attribution may accelerate this denial and deception trend, increasing the cost of cyber defense efforts and resource allocations.”

Event-centric digital business strategy—All is not doom and gloom in the tech world. Take this term, coined recently by Gartner Inc. It derives from the concept of an “event-driven architecture,” which the consultant predicts will be “an essential skill in supporting digital business transformation by 2018.”

Anne Thomas, vice president and analyst at Gartner, puts it this way: “Digital business demands a rapid response to events. Organizations must be able to respond to and take advantage of ʻbusiness moments’ and these real-time requirements are driving CIOs to make their application software more event-driven.”

She goes on to explain that “you can’t capitalize on the business moment if you don’t first recognize the convergence of events and the digital business opportunity.”

Meanwhile, “event-driven architecture” generally refers to the ability to adopt and coordinate technology innovations such as microservices, the Internet of Things, artificial intelligence, machine learning, blockchain, and smart contracts. At least, according to Gartner.

Service delivery automation—According to Everest Group, clients of service providers are starting to demand not only cost reduction but also next-generation benefits focused on business outcomes and enhanced customer experiences.

“For service providers looking to pivot quickly from an arbitrage-first model to a digital-first one, SDA [service delivery automation] is one of the key levers,” it says.

SDA comprises a range of technologies that can, or could, interact with each other, such as robotic desktop automation, robotic process automation, autonomics, cognitive computing (machine learning, deep learning, and neuro-linguistic programming), and advanced artificial intelligence.

Okay, so what is “autonomics” in this context? Again, here’s an ancient word co-opted for the computer age. According to Whatis.com, “An autonomic computing system would control the functioning of computer applications and systems without input from the user, in the same way that the autonomic nervous system regulates body systems without conscious input from the individual.”

Branchless banking—This also is known as “direct banking,” and it’s something to be paid attention to. Recently, J.D. Power conducted a study on bank customer satisfaction and found that upstart direct banks rank higher than traditional retail banks.

“Consistent with the trends we’ve seen in mobile banking, customers who take the leap of faith with branchless banking are having very favorable experiences,” says Bob Neuhaus, financial services consultant at J.D. Power. “Look for continued rapid growth from branchless banks and expansion of branchless strategies from traditional banks, especially outside of their branch footprints.”

Conversational banking—This means having customers interact with their bank by voice or text, but not necessarily with a human teller at a branch or with a human on a phone. Increasingly, according to a blog called Digiday.com, it means interacting with a nonhuman, or a chatbot, about one’s finances, such as checking a balance, finding how much is spent on groceries, or developing a budget.

It’s much more than simply using Siri or Alexa. The interaction with a chatbot is almost indistinguishable from talking with a real person. The “almost” part is that it is claimed that conversational banking actually can be faster and more thorough than speaking with a human customer representative. For example, a simple query about the most expensive transactions one has made recently can almost instantly produce a text message with a neat chart, rather than a rambling conversation while the human thumbs through one’s account record.

It can also ease the way through some tough conversations from the bank’s point of view, such as in debt collections. Talking through a bot can be less intrusive than dealing with a collection agency that might seem overly aggressive and off-putting to the customer.

Sources for this article include:

What is conversational banking?

More in this category: « What is AI really good for? Never too early to predict fintech future »
back to top