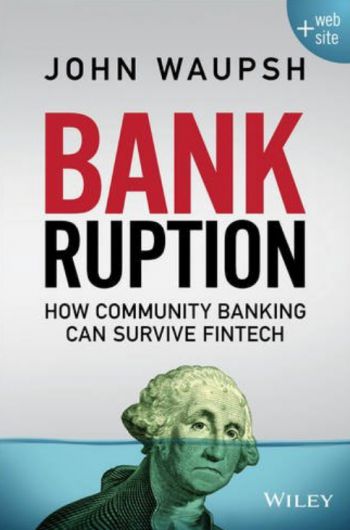 This article was adapted with permission of the publisher, Wiley, from Bankruption: How Community Banking Can Survive Fintech, by John Waupsh. Copyright 2016 by John Waupsh. All rights reserved. This book is available at all booksellers. In the near future Banking Exchange will present a review of the book by a veteran community banker.

Today’s bankers get so much “help.”

The help/noise would overwhelm any banker—if the content of the cacophony hadn’t already done so.

Consider this progression of events:

• One day, peer-to-peer (excuse me, marketplace) lending is going to transform how someone borrows money.

• The next day it is torn apart by the SEC.

• Then, it’s legal and thriving: all unicorns and showboats.

• Seemingly, a few days later, it’s in the Consumer Financial Protection Bureau’s crosshairs (though consumers don’t seem to be worried about it).

Or maybe, fintech never shuts up.

According to Mike D King, in April 2016, there were 138 unique tweets and 562,000 exposures per hour for “#fintech,” not including tweets about fintech that don’t contain the word.

This continuous media and pundit churn delivers the consequence of imposed, conscious blindness. Those of us who should know most about what is happening end up knowing the very least, because, to put it simply, keeping track of it all is mind-numbing and defeating.

Sexy, boisterous, overcompensating fintech startups extend the partnership olive branch to financial institutions (again). Perhaps the noise is simply a byproduct of the remarkable innovation these guys bring to the table.

So maybe the weight of it all is something other than the noise.

Maybe community banking as we know it is no longer relevant

Buckminster Fuller (inventor of the geodesic dome, a pioneer of sustainable planetary thinking, and one of the greatest comprehensive design minds of the modern era) spent most of his adult life relearning everything he was taught in school.

His rationale for this was quite simple: much of what he learned in school classrooms and texts originated from facts that had been skewed, over time, by governments, religions, societies, or simply accidents (a byproduct of human-powered recordkeeping).

The banking world of today has more contaminated and more biased reporting than Bucky’s of a hundred years ago.

For example, if one bothered to research the data behind the aforementioned stats, one would find that nearly the same number of institutions disappeared the six years preceding 2007 as the six years following.

Does that make the trend more or less alarming?

What if there were more sizable declinations of financial institutions at other points in history—would that change the argument?

What if, upon closer inspection, one found the disappearing financial institutions were being replaced (via new charters) at a much slower rate than in the past?

And what if, in one’s quieter moments, one were to consider that artificial intelligence can and should automatically manage money for humans and that blockchains and their enabled technologies such as bidirectional payment channels will be the ultimate arbiters, thereby making banks and credit unions obsolete?

This is the juncture when the preponderance of noise clouds the real data and obscures actionable intelligence.

The future of community banking is now

Futurists, technologists, and others suggest an end to banking as we know it.

The future of banking is entertaining to read and lots of fun to listen to or to debate at a conference. But it’s also not the best use of time for a banker who needs to drag his or her credit union or bank across the ever-widening chasm between yesterday and today.

If you want the very end of the banking story: ones and zeroes win.

In the future, thousands of existing “financial institutions” will assimilate; our money will be managed for us automatically via artificial intelligence, dumb or smart contracts, and learned behaviors.

And no banked human anywhere on earth will have to think about bills, managing their money, or rates on insurances, mortgages, or deposits.

Any prediction toward the “big” future will prove itself true at some point in the horizon of time.

But we should not confuse that far off world with today’s—or even the next 10 years’—reality.

And, perhaps if financial institutions make small changes now, they can adapt or, better yet, knock a dent in that trajectory.

Ignore the noise and take action

Community banking executives need a clear baseline—a cleansing of the various myths that have promulgated themselves into mainstream thinking—in order to take action and help return a currently dying model to thriving relevance.

For those who want to remain a relevant institution, here are some concrete, actionable items to help you cut through the noise and successfully compete in the future:

1. Create a plan to onboard users beyond your current geographical footprint.

This may involve changes to charters and internal processes—or simply a change in mindset.

You may not need that plan today. But you will need it soon.

2. Who at your institution owns the outreach to your examiners to discuss digital acquisition and future innovative ideas?

Which branches are you going to cut?

3. How much total expense will you cut out of your remaining branches?

Specify a dollar amount and a deadline for the reduction.

Which expert partners will you align with to help you?

You will need the skills of experts—for almost all you do.

4. Which board member(s) do you need to replace?

5. Write the steps needed at your bank to apply for, and the number of actual days before hearing a decision on, the following products: a checking account, personal loan, auto loan, credit card, mortgage, and small business loan.

Then make it fully digital—fast!

6. Create a schedule for the above list—work back from the rollout date until you get to tomorrow.

If there are gaps in your planning because you don’t know if there’s a vendor to do what you want to do, just assume there are five. Then do the research after your brain dump. (There are probably 50 vendors, by the way.)

Your journey is just beginning

Seeing through the noise is merely the first step in ensuring community banking’s path to continued relevance.

To remain competitive amidst the fintech disruption, modern consumer demands, and increasing global competition, successful community-banking leaders today are those who are daring to step out of their comfort zone and put in the hard work.

Are you up to the challenge?

If you can’t or don’t want to put in the effort included in the list above, turn in your keys, now. 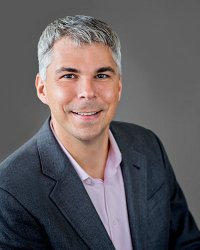 John Waupsh has pioneered integrated fintech and financial marketing solutions for over a decade, including at Kasasa, a national brand of financial products offered exclusively at hundreds of community financial institutions around the U.S. His work has helped Kasasa grab three Finovate “Best of Show” titles, as well as numerous other awards. Waupsh is Austin Chapter Lead of Next Money, and a mentor with Bank Innovation’s global fintech accelerator, INV. He is a speaker at top fintech and banking conferences, and author of Bankruption: How Community Banking Can Survive Fintech (Wiley, November 2016).

More in this category: « Your guide to the blockchain revolution Ten years to digital or else? »
back to top