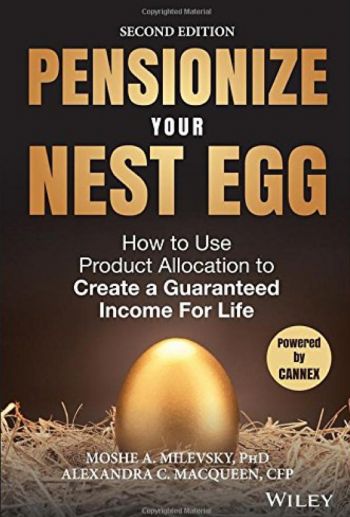 Pensionize Your Nest Egg: How To Use Product Allocation To Create A Guaranteed Income For Life, 2nd Edition. By Moshe A. Milevsky and Alexandra C. Macqueen. Wiley. 234 pp.

As an Illinoisan, I am much too familiar with the phrase “pension crisis.” Thankfully, Pensionize Your Nest Egg: How to Use Product Allocation To Create A Guaranteed Income For Life is not about my state’s government pension issues, but is instead an in-depth study of the need for individual pensions, whether there is an employer plan or not.

The authors—Moshe A. Milevsky, PhD, and Alexandra C. Macqueen, CFP—are a professor and a financial planner, respectively. They  make an orderly and logical case for retirees’ need to have a portion of their retirement income in the form of an annuity or pension. The book is a second edition, elaborating on the original, which was written for Canadians, to expand the authors’ points to the U.S. and other countries.

What does the term “pensionization” in the title mean? In the authors’ words: “It is the process of taking a fraction of your nest egg (your hoard of stored gold) and turning it into a guaranteed income that lasts for your lifetime. Pensionizing your nest egg enables you to get where you need to go. It will ensure you have enough income (enough gold pieces) for as long as you need it.”

Working through the process

The book is presented in three parts. They include: why a personal pension plan is needed; how to develop a sustainable retirement solution through using the pension process; and the seven steps to “pensionizing” a nest egg for the reader.

The first part answers typical questions about pensions and retirement. The section provides data to support the reasoning for the assumed need for using an annuity, specifically, as part of one’s retirement plan. The chapters cover risk levels of typical retirement savings, inflation, unexpected costs, charts on longevity, a very thorough explanation of pensions and how they work; and retirement spending.

Throughout this first part, I thought the data was sound and logical. I was somewhat amazed how virtually all the concerns brought up by the issues of market risk, inflation, and so forth were always solved through the use of the personal pension as a part of retirement planning.

I do remember that when offered a job by a bank with a pension, I was quite pleased. However, a few years into my time with that company the pension was stopped, due to logical reasons. The pension was extremely expensive to the company. Although the issue of cost of setting up the personal pension is discussed in the book, the issue of the expense seems to be discounted.

This discounting of the cost was felt in Chapter 5 which is titled: “Beyond Asset Allocation, Introducing Product Allocation.”

This chapter uses some of the same processes used in asset allocation, such as different baskets, silos, and spectrums to suggest that the retiree needs to have the annuity product in their arsenal of products to have a financially successful retirement.

This part of the book did not sit well for me, as I am a firm believer in the need for diversification of assets. However, I do not think it is imperative that I have product diversification.

The book considers “three product silos,” consisting of equity securities; defined benefit products, such as pensions and life annuities; and a third silo of financially engineered products that fall between the previously mentioned products.

My own three silos or legs to a successful retirement have been the use of personal assets; retirement assets such as defined contribution and/or defined benefit assets; and government retirement, which usually means Social Security for the U.S. This is vastly different from the product allocation being discussed in Pensionize Your Next Egg.

Milevsky and Macqueen acknowledge that this is somewhat an oversimplification, yet it is interesting that according to the book’s infographic following the narrative on this point, both lead to “Pensionizing is optimal” as the conclusion.

It is quite evident from the book that the authors are very mathematically minded, as their reasoning about product allocation is presented. (Early on the authors joke that if their reasoning ever becomes obscure, “Those are probably the parts where the math prof got the other hand.”)

The third section of the book, which covers “the seven steps to pensionize your nest egg,” takes the reader through the process of determining how to product allocate your assets.

Many of these steps are good. Others did not leave me with a good feeling.

For example, there is the section “What if I’m worried about the future of my DB Pension Plan?” (defined benefit) The authors do provide some good advice, such as “If you suspect or fear your pension plan may reduce or end their payments to you in retirement, leave the plan—if you can.”

The reader is then advised to create their own pension. However, what if the insurance company selected is no better off than the government entity or company the person is leaving?

The process presented continues through the seven steps and a dollar amount is determined. It is an amount that each retiree must find to pensionize, in order to produce the desired retirement income. In the final thoughts, the authors’ conclusion is restated: “If you won’t have income from a real pension in retirement, make sure you go out and get some real pension income.”

I did appreciate the authors’ tenacity in presenting their case on how “to create guaranteed income for life.”  However, I was not convinced that this product allocation would be in my own best interest for retirement. 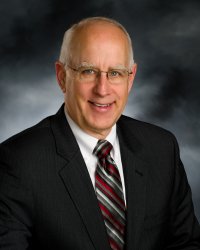 Latest from Will Taylor

More in this category: « Looking at “impact investing” Navigating your bank’s next software project »
back to top