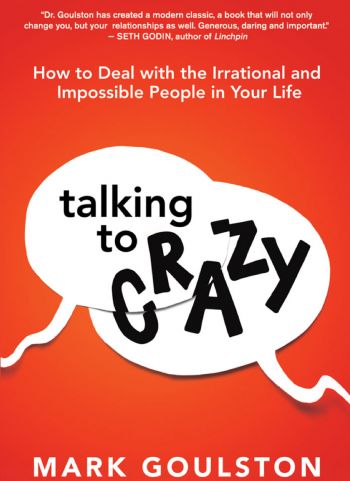 Talking To Crazy: How To Deal With The Irrational And Impossible People In Your Life. By Mark Goulston. Amacom. 259 pp.

When is the last time you were in a situation when it seemed like no matter what you said or did, you just could not get through to someone?

Maybe the other person had completely lost his temper, was crying uncontrollably, or refused to accept reality. You probably tried explaining and reasoning with him, but what did you do when that didn’t work?

You may have decided the situation was hopeless, that this person was “being crazy,” and there was nothing more you could do. You probably gave up, and resolved to avoid that person as much as possible in the future.

Next time—and for all of us there will certainly be a next time—that doesn’t have to be the case.

In Talking to Crazy, highly regarded psychiatrist Mark Goulston, M.D., explains the causes of irrational behavior and provides various strategies for regaining control in such situations, whether they occur in the workplace or at home.

While the book’s title may sound glib, Goulston treats the issue of dealing with irrationality very seriously. He explains what he means by “crazy”’ in this context by listing the four ways people typically display irrational behavior:

• Inability to see the world clearly.

• Saying or thinking things that make no sense.

• Making decisions and taking actions that are not in a person’s interest.

• Becoming downright impossible when someone tries to bring them back to the side of reason.

Before you exclaim, “That’s my mother-in-law!” remember that at some point, you were probably the crazy one (and that from your mother-in-law’s perspective, maybe you still are).

If you suspect the irrational person you are dealing with has a mental illness, he advises that you should remove yourself from the relationship if you can, or discuss the situation with a professional therapist if you cannot. Goulston also lists several identifying characteristics of histrionic, narcissistic, dependent, paranoid, borderline, and sociopathic disorders to help you in making this determination.

Additionally, the final section of the book is devoted to strategies for such situations, including where to turn for help; how to get a loved one to agree to seek help; and what to do if you believe someone you know is suicidal.

Generally, though, the irrational behavior we encounter on a day-to-day basis is not the result of a true mental illness.

Instead, Goulston explains, we typically face irrational people whose personalities make them more prone to such behavior due either to their nature or their nurture.

The most common causes are either being born with tendencies toward more extreme pessimism or emotionality, or facing early experiences like coddling, criticizing, or ignoring that shaped their personalities and created these tendencies.

Before preparing to confront someone else’s extreme emotionality, Goulston advises readers to “heal thyself,” so to speak, by first facing your own ‘”crazy.” This effort is necessary to avoid reacting in a way that will only fuel the fire of the other person’s “crazy.”

Goulston lists several ways to identify your own emotional baggage and your worldview, which are the cause of the biases that will influence your interactions with others. He advises that you should consciously keep your own “crazy” at bay while you are under attack.

While he details several specific strategies, they generally come down to taking a moment to stop and think about the situation at hand logically before taking any action, and considering the best, most helpful course.

The author also explains what to do to regroup if you do have a negative knee-jerk reaction that causes you to lose control.

After preparing readers to retain their own sanity in the face of another person’s “crazy,” Goulston explains that in order to choose the best mediation tactic you should first identify which of the nine most common “MOs” of irrational people you are up against.

These are discussed in detail, along with questions to help you determine which MO fits the “crazy” at hand. Different strategies will be most successful whether the irrational person is characterized as emotional, logical/practical, manipulative/needy, fearful, hopeless/withdrawn, martyred, bullying, know-it-all, or sociopathic.

Once the MO has been identified or at least narrowed down, you will be able to apply strategies to regain control of the situation.

A general rule of thumb advised by Goulston is to “lean into the crazy,” rather than rejecting the other person’s stance outright, however illogical or incorrect it may be.

He lists 14 tactics for dealing with “crazy” behavior that include strategies, like “the AEU technique,” in which you Apologize, Empathize, and Uncover. Another technique is “assertive submission,” when you disarm an attacker by putting him in charge instead of pushing back, which is unexpected.

Several of the other strategies also involve actions that seem counterintuitive, but they work by changing the dynamic of a power struggle in a non-aggressive way, helping you to gain control of the outcome.

A good example of this is the “coup contrecoup,” a risky strategy by which you disarm a “crazy” person and prevent a nasty or sarcastic attack from escalating by voicing the “crazy” person’s thoughts before they do. Goulston says they will then likely deny having the thoughts you voiced, because disagreeing with you is the only way for them to remain “right.”

Most of the examples given relate to relationships with supervisors, coworkers, and clients in a professional environment. However, a separate section is devoted to “crazy” interactions with lovers, children, and parents, which Goulston explains often require different strategies due to their more emotionally-involved nature.

Among other situations, these chapters deal with repairing a toxic relationship with an adult child, getting an ageing parent to accept help, and how to best be there for a family member in pain.

In business and in our personal lives, we all deal with irrational people and situations. Talking to Crazy contains valuable insights into these types of interactions, helping us to understand why they occur, what not to do to add fuel to the flames, and how best to de-fuse the conflict.

Goulston includes a multitude of real-life examples, lots of detail about each of the MOs and strategies he presents, and includes very important information about what to do in the face of true mental illness.

I found this book to be an important addition to anyone’s library, because it encourages us all to be rational, empathetic, and effective in all of our relationships with others, especially when they are at their worst. 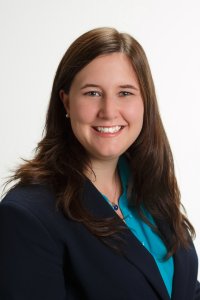 Mallory Barbee is assistant vice-president and commercial lender at CBC National Bank, Beaufort, S.C. She is a frequent banker book reviewer for www.bankingexchange.com

More in this category: « Excerpt: Chris Skinner’s ValueWeb Looking at “impact investing” »
back to top