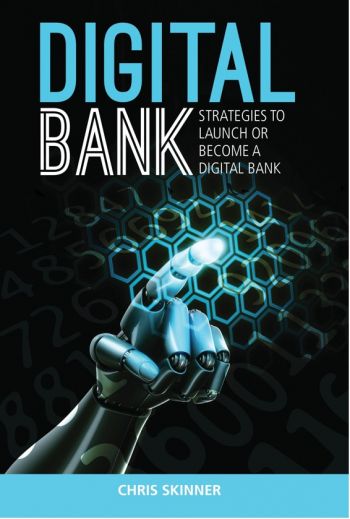 For many years, banks controlled the entire customer relationship with a very personalized one-on-one interaction between customers and their banker at branches. As technology developed, banks started providing services through remote channels that are many and not very personalized.

Becoming a digital bank, according to author Chris Skinner, means taking back the very personalized one-on-one relationship with the customer through digitization. The delivery method is mobile, rather than physical branches, the new method designed to provide functionality to the customer at their point of need and organized around each customer's data.

The subtitle Digital Bank states it is comprised of suggested strategies to launch or become a digital bank.

It is important to understand the author’s definition of a digital bank:

"Digitization has meant banking is no longer about banking money but banking data and keeping data secure. The bank of the future will connect intimately via mobile to the customer 24/7. It will not only be proactive, but predictive of customer needs and provide a connection not just to a payment or to money, but to a financial lifestyle."

Where we’ve been, where we’re going

While what Skinner describes is revolutionary, banks have been trending in that direction for decades.

Banks began turning customer information into data back in the 1960s with the advent of computers. Then in the 1970s, ATMs were added, in the 1980s call centers, in the 1990s the internet, and in the 2000s mobile banking.

Bankers have viewed all of these products as stand-alone channels and maintained them in separate silos within the bank, Skinner points out. They then delivered these options to the customer from the foundation of the branch bank network.

Skinner insists that banks can no longer view these as different delivery channels. In the digital bank, they need to all be viewed as one channel that connects directly to the customer.

Banks aren't the only ones that view each of these as separate products. The core processors who provide banks with their software have also layered these products onto their legacy software. If the software the bank uses won't allow digital integration between products, Skinner suggests finding new software that will integrate.

That sounds simple enough. But most community banks in the U.S. purchase their software from a handful of providers. If they can't provide the software platform for the digital bank, it is going to be difficult for most banks to make the transition.

As a veteran community banker, I equate a bank changing core processors to divorcing your spouse.

In some ways, larger banks that have their own software engineers to design their systems have an advantage and they have led the way with much of the innovation in becoming a digital bank. First Direct and USAA are examples of banks that have used remote banking successfully. These banks have made their remote services as simple, easy, and convenient as possible.

The "secret sauce" of remote banking is the relationship you feel when you interact with one of their employees based upon the amazing customer service you receive.

So what will be the fate of the branch in the digital banking era?

The purpose and quantity of branches will change as banks become more digital. The number of branch banks in Europe has been declining over the past ten years, but in the U.S., the branch network has grown. Only recently has that trend ended and some banks continue to add branches.

Are you a “Digital Alien”?

One of the reasons he states it is difficult for bankers to give up on the brick-and-mortar branches is the fact these banks are run by "digital aliens" who don't understand the digital life.

"Digital Alien" is a phrase coined by Marc Prensky, a writer and speaker on learning and education who also coined the term “Digital Native.”

“Digital Alien” refers to an adult who is not comfortable using the newest internet-based technologies. By Digital Native, Prensky means someone of the younger generation who has grown up with the internet.

Research from AlixPartners indicates 53% of banking transactions are now done with online banking as compared to 14% for in-branch visits. Over half of Americans use internet banking today and a third use mobile banking.

The challenge that banks face is that the customer wants both electronic banking and in-person banking available to them even if they don't use the services. In fact, research he cites says that 88% of customers are more likely to choose a bank with multichannel capabilities including a branch. As the mix of bank customers shift from digital aliens to digital natives, the greater expectation will be for mobile delivery of products.

Compliance often gets blamed for banks’ hobbled competitive ability. One of the greatest reasons branches are still needed in the U.S. is the "know your customer rules." When banks open a new account, the customer is required to come in person to the bank with all of their forms of identification in order to verify their identity.

Skinner believes this shouldn’t be a barrier to banks here. He recounts how the Nordic banks worked with the government and created a digital identity that is used for online bank account opening. Now 80% of the Danish population use internet banking—double the average for the European Union. The digital identity allows the banks to know their customer and open an account online without requiring an in-person visit to the bank by the customer.

Engagement beyond your own platforms

How will the future Digital Bank engage with the customer?

Skinner says that banks will use social media to engage with their customers. Comments such as a Facebook post stating that the customer is looking for a new car will become a point of engagement for the bank to interact with the customer by sending them an offer for a new car loan. Alternatively, the bank could send the customer a message that states they can't afford a new car based upon the fact they are currently past due on other obligations.

To digital aliens like myself, this may sound like an invasion of privacy, but many young people want financial advice from their bank—the way they want it.

Of course, this type of communication is done on a permission-only basis, but digital natives are used to communicating their personal information via the internet.

The internet itself will be redefined in the future. Soon we will be in a world where everything, everywhere is connected to the internet. This proves more reason for banks to deliver all of their products through one channel, integrated into one flow of information from all sources within the bank. You don't want to have a customer receive an e-mail offer for a car loan when your loan department just sent that customer a delinquency letter.

Banks maintain a tremendous amount of data on their customers. Data mining is going to be critical and banks should be personalizing services based upon the customers’ digital footprints. This means product information will be delivered just in time and be relevant to what the customer is doing at that moment.

The world Skinner paints is chock-full of cultural adjustment for aliens. For example, as customers move to digital wallets, it provides some interesting questions as to whom the customer “belongs”?

Is it the bank whose card is in the digital wallet?

Or is it the company that provides the digital wallet?

And then, who will be responsible for any losses that customer might incur?

Rise, and rise, of the financial app

For the first time in history, the entire world is connected via mobile phones, Skinner points out, both personally and with businesses. This allows for the possibility of person-to-person payments to be transmitted anywhere in the world over a mobile device. It is predicted that emerging economies will be at the same level of smartphone usage by 2015 as the developed economies are today, according to Skinner.

This opens up an opportunity for the delivery of more services via apps. Apps make banking simpler and can be designed to be specific to a certain activity.

As an example, Barclays Bank in the United Kingdom introduced QR codes to its P2P payments app, Pingit. The app allows billing companies to send paper payment requests to customers with a QR code. If the customer uses their smartphone to read the code, all of the billing information and customer account information is embedded in the code so the customer only has to confirm payment. Once the transaction is confirmed, the rest of the transaction is performed electronically.

Apple recently announced its wallet, which uses NFC technology and tokenization for purchases at retailers. As a banker, I find it difficult to know which technology will emerge as the leader. How will you select new technology? No one wants to go with the tech that winds up by the wayside. (Think Betamax versus VHS versus DVD versus download versus cloud versus who knows what’s next?)

Survival, not just a someday affair

Banks need to start making strategic plans to become a Digital Bank, before it is too late.

They need to stop trying to be all things to all customers, but strategically plan to build on the things they do very well. Customer data is the most valuable asset banks have and they need to begin using it to be predictive of consumer behavior, which will benefit the customer and strengthen their relationship to the bank.

If Skinner’s main sections don’t convince the reader that they must embrace change, Skinner supplements this with real-world conversations that should galvanize the banker-reader.

Digital Bank contains interviews with bankers, neo-bankers, and the co-founder of Bitcoin Consultancy Ltd. They each discuss what their company has done to prepare for the new digital world.

I enjoyed reading this book, although at times I felt it was a little repetitive. I also felt a formal index would make it handier to the reader for later reference. 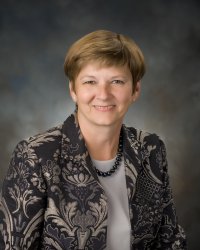 Jane Haskin is president & CEO, First Bethany Bank, Okla. Haskin, is a member of the Banking Exchange Editorial Advisory Board and a former member of ABA's Community Bankers Council. She is a frequent reviewer for www.bankingexchange.com

More in this category: « Troubled banker who did the right thing Bankers in their “classical” role »
back to top