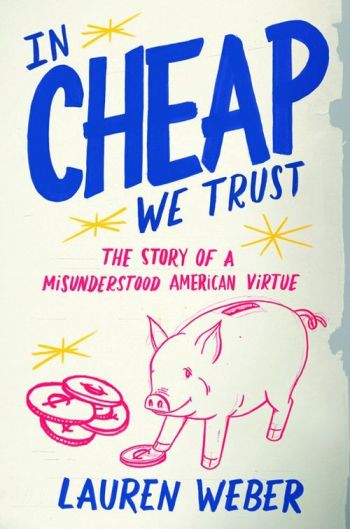 In Cheap We Trust: The Story of a Misunderstood American Virtue By Lauren Weber, 310 pp., Little, Brown and Co.

Are you cheap? Maybe you are. Maybe you only think you are.

Before you read this book review, a few questions for you:

(1) That coffee you’re sipping: Is it a $4.45 venti latte from Starbucks? A $1.50 cup of joe from Dunkin’ Donuts? A 75 cents takeout from the local diner? Or is it whatever you found—free—in the bank’s break room pot?

(2) The web connection you accessed this through: Is it your home, high-speed cable-based connection? Is it an inexpensive dialup connection? Are you at the library? Or are you mooching off the bank’s service at lunch because you’re too cheap to pay for your own service?

Cheap trip into the past and present

How you answered these questions will tell you some things about your own attitudes towards money and material things, and if you read Lauren Weber’s In Cheap We Trust, you’ll find out a great deal about Americans’ attitude towards money and possessions throughout the nation’s history, and into today.

Along the way, Weber brings forward a cast of dozens of characters from American history, major and minor, including Ben Franklin and his “Father Abraham” aphorisms about thrift; Smiley Blanton, pop psychologist and booster of the good of conspicuous American consumption; Hetty Green, the famous, and aptly named, miser, who lived in tenements and officed on Wall Street; Henry David Thoreau, who didn’t really spend all of his time at Walden Pond; Thomas Jefferson, who dreamt of a country of thrifty yeoman farmers, but who spent most of his life in levels of debt that rival the credit-card-obsessed generations of today; and to the modern-day “freegans,” who dumpster dive and otherwise scavenge a living by gleaning the waste and junk of careless fellow Americans.

(On that last point Weber takes you along for a ride—walk, actually—on a freegan “trash tour.”)

In many ways, the story of thrift, and the lack thereof, is a story of banks, both as lenders and intermediaries. Prepare to feel both pride and pain. An entire chapter, “A Nation of Savers,” presents a “warts and all” history of the savings institution movement.

The book begins with Weber, a former retail reporter for Long Island, N.Y.’s Newsday, pondering the cheap trait she inherited from her father—to whom the book is dedicated. “A cheap and generous man,” as the dedication calls him, he set her an example that, though extreme at times (he insisted on washing the family dishes with cold water; don’t think about that too much), gave her some attitudes that made her view the world differently. Her cheap encounter with a seven-year-old can of baby clams that she couldn’t bear to simply toss is instructive, and will put you off seafood for a month.

In Cheap We Trust only indulges in personal reflections for the sake of setup, and analytical and concluding thoughts. While occasionally light-hearted in tone, the subjects of thrift, spending, overspending, and overwhelming debt and waste, are treated quite seriously, and more than one thought will be provoked whether you read this as a banker or as a consumer.

Weber explains how she set out on her research, early on:

“Given the turgid economic straits of the last couple years, many commentators have been calling for a ‘return to thrift.’

“This phrase—a return to thrift—leaves me cold.

“For one thing, I’m not convinced that ordinary Americans ever truly valued thrift in the first place. When I started researching the history of frugality, I assumed, as most Americans probably do, that we were once a thrifty nation but that we had become lazy and spoiled over time, a condition abetted by a cabal of corporations and advertising firms. I began this book with a single question in my mind: What happened to thrift in America? But as I got deeper into the subject I came to realize that what we consider old-fashioned thrift—some combination of resourcefulness, prudence, simplicity, and aversion to debt—was more the result of circumstance than virtue. Thrift was determined by necessity in the early days of the republic.”

And, as Weber tells the story, it wasn’t always habit-forming. “Thrift was a ‘virtue’ many Americans couldn’t wait to relinquish,” she writes.

It’s your duty to [save/spend]

The supposed thrift of the Founding Fathers and the pioneers got Weber digging into history, and what she found was a much more complex pattern. As a nation, we’ve swung back and forth between thrift and profligate waste with regularity, though the swings seem to have grown wider. Indeed, through a good part of American history, major business and political figures, popular writers, and other opinion leaders alternately urged thrift and spending. It depended on what suited various agendas.

Wartime propaganda, as traced by Weber, especially in the 20th century, frequently held up to shame those who spent for themselves, even on some basics. This was equated with helping the Kaiser or Hitler, for instance. With wartime boom times over, leaders frequently changed over to the drum for spending, to get the nation going, or to keep it going.

While much of Weber’s book deals in history, she reserves her later chapters for both a survey, and a critique, of how we live cheaply (or not) today. You might say that this section is an explanation of why immoderate behavior invariably produces pain. She writes extensively about modern attitudes towards savings, debt, and spending. While she doesn’t’ bludgeon the reader with numbers, she makes a detailed case for how far away from thrift the nation as a whole has veered, and why so many of us hurt so much—sometimes without even realizing it.

After a discussion about the failure of many Americans to save for potential emergencies, let alone for long-term needs such as retirement and late-life health care, Weber summarizes the sorry picture this way:

“…the reasons to save are becoming more and more compelling. Yet large chunks of the population remain unprepared.”

The days of easy credit, for now, have passed, but as Weber elegantly summarizes, the nation will be dealing with the aftermath of that period for some time, with much pain.

In the final chapters of the book, Weber turns to overviews of modern times that can lead the reader to some introspection and reexamination of their attitudes towards money and “stuff.” She also dissects the possible roots of cheapness—who knew that Freud wrote on frugality? (Like other Freudisms, this one is quite bizarre.)

She winds up the book with a short primer on frugal living, which she begins with typical humor:

“If I had to offer some advice on how to live cheaply, I’d boil it down to two sentences: ‘Don’t buy stuff. Don’t spend money.’ (My three exceptions are physical health, mental health, and winter boots.)”

This is followed by a list of books, some very old, some new, and websites, that can help the cheap and the would-be cheap.

Thrift and the “thrifts”

From the perspective of Banking Exchange’s readership, especially interesting, from a historical view, is Weber’s second chapter, “A Nation of Savers.”

The chapter traces the often fascinating development of the American savings institution. Thomas Eddy, a wealthy Quaker insurance broker, started the Bank of Savings in the City of New York, in 1819, as a place where sailors, laborers, and others could put money by instead of splurging. Weber describes how the new thrift institution took in accounts from 80 people its first day, “in exchange for a passbook and the promise of 5% interest.” (Many more New Yorkers would line up these days for 5% interest rates, too.)

Eddy and others involved in the early movement were philanthropists attempting to improve society by playing to “individual responsibility and up-by-your-bootstraps grit, and to reformers’ ideas about the ‘correct’ forms of spending and consumption.” Later, after the Civil War, the movement embraced the freed slaves as well, in such institutions as the “Freedman’s Savings and Trust Co.,” founded to build thrift among the freed slaves to enable them to save for land or other tools of financial independence.

Later on, some players who saw the movement as a means to their own financial ends came along, mixing a deal of cynicism into the genuine concern and the noblesse oblige that founded the movement.

In time, the industry settled into today’s pattern, with savings banks more and more melding in purpose and look with their commercial bank brethren.

Why does “cheap” matter?

Many of the cheap folks that Weber describes—especially the freegans, whose name is a play on the über-vegetarian vegans—go to extremes that most Americans, short of absolute necessity, would never embrace. Yet the lessons of the history she presents, and her thoughts on the present, give the reader a great deal of insight on the need for more moderation in habits. She summarizes the goal of her examination of thrift in this way:

“I imagine cheapness as a new framework for low-cost living, a twenty-first century version of thrift. I’m not talking about getting a lot of stuff at low prices, even though I love a bargain as much as anyone else. I’m talking about living cheaply, consuming less, scaling down our needs and wants to modest levels that are economically and ecologically sustainable. Cheapness requires practical knowledge—a set of skills and strategies, such as knowing how to fix a leaky faucet or how to tile your own kitchen floor, driving at the speed limit to save gas, eating by the seasons to take advantage of bumper harvests, replenishing your wardrobe at thrift stores, or cooking lentils thirty different ways. But cheapness is also a mind-set, a habit of asking yourself, ‘Do I need this?’ and ‘Is this a good use of my hard-earned money?’”

How Americans answer such questions, in the wake of today’s crunch, may well determine what the economy, and the banking system, will look like in the years immediately ahead.

If you'd like to review books for our online book column, or have recently read a book that you found helpful that we haven't already reviewed, please e-mail [email protected]

Get banking news, insights and solutions delivered to your inbox each week.

Tagged under Books for Bankers,