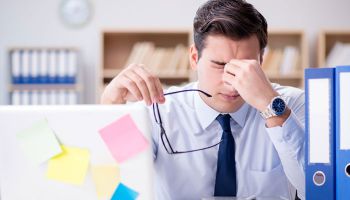 The industry is going through a phase where financial institutions are taking a hard look at their key vendors, and they do not like what they see.

Vendor relationships have become very stressful. Customer service is deteriorating, which is the first sign of something going wrong.

Relationship managers are being asked to correct simple things like statement rendering errors—but they don’t not show up, or return the phone call.

One of the most stressful actions produced from a vendor is going dark and not answering voice mails or emails, and just being a no show for over a year.

Some bankers don’t even know who their relationship manager is!

You are not alone

If you were wondering to yourself if other bankers are encountering these issues, join a peer group and find out for yourself.

Here is a preview of what you’ll hear: Bankers are getting fed up … and they are talking about it. They are tired of being coerced and mistreated by vendors who claimed during the sales pitch that they wanted to be your partner.

Darker becomes the storm. Bankers are beginning to conduct competitive bid projects and they are astounded at what they find in their contracts.

As in surprises like, “You mean my contract term was extended by 11 months because the vendor was late in the rollout, not us?” That’s not right, but it’s likely been in your contract from day one.

Or there’s this “favorite”: “What do you mean we have to purchase that product from you? We never even talked to you about it during the presentation.” “Well, Mr. Client, we have an exclusivity clause and that product is on the list in the schedule you executed.”

“You have got to be kidding me, right?”

Nope, it is in the contract.

The one thing the industry has discovered is that vendors will enforce the contract … and you signed the contract. Basically, every schedule, exhibit, or attachment you execute could have a significant impact on the relationship with your vendor, like it or not!

Banks are not asking themselves what a partner really is.

Instead, relationships have been inadvertently extended. Costs increase at ginormous rates. For example, a five-year contract with a 5% annual price increase beginning in Year 2 will increase 21.55% by the start of year five. What has the vendor done to earn that increase?

The march is on, and banks that thought they would never convert feel as though the only way they can get out from under such an exploitative relationship is to leave. No choice.

Some feel their goodwill has been taken advantage of and their trust compromised. This is not a good thing!

When you leave your vendor

So, you have decided to leave… Just so you know, below is a list of what we look for when recommending a vendor.

Your prospective new vendor’s corporate environment should exemplify the following:

1. A philosophy of doing the right thing.

5. Willingness to work with the customer, not dictate to them or penalize them for the decisions they have made based on their best interests.

6. A community bank processor that treats their customer in the same manner you treat your customers.

The community bank model works, and the march is on to those vendors who understand and live this model. You do not need to accept anything less than this. Period!

Finally, ask yourself the hard question and be prepared for the answer:

Over the term of your existing agreement, has your current vendor become your advocate or your adversary?

Then prepare to join the other bankers on the march!

More in this category: « What was hot, now is not “Hey Google! Alexa! Or whoever you are!” »
back to top