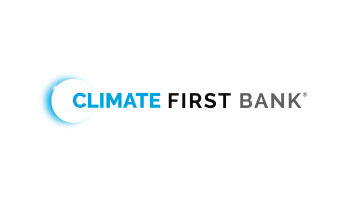 Climate First Bank, a St. Petersburg, Florida-based community bank has joined the Net-Zero Banking Alliance (NZBA) which represents over 40% of global banking assets and has 98 members worth $66 trillion in total assets.

The industry-led program is convened by the United Nations Environment Programme Finance Initiative and includes global banks that are committed to aligning their lending and investment portfolios with net-zero emissions by 2050 or sooner.

NZBA members commit to set scenario-based interim targets for 2030 or sooner for priority sectors, prioritize areas of most significant impact such as greenhouse gas-intensive and emitting sectors, annual publishing of emissions and emissions intensity, consider scientific knowledge, set first targets within 18 months of signing and report and disclose progress against a board-level reviewed transition strategy.

In addition to the NZBA, the bank is also a member of the 1% for the Planet and works closely with the Florida-based environmental non-profit organisation, We Are Neutral, which tracks and offsets its environmental impact as part of its net-zero commitment.

Since opening in June 2021, 43% of the loans that Climate First Bank has financed have been mission-aligned loans such as solar energy, LEED retrofitting and electric vehicle charging infrastructures.

Ken LaRoe, CEO, and founder of Climate First Bank says that banks have a huge part to play in the battle against the climate crisis.

“Each investment in fossil fuels and other extractive industries is an investment against humanity’s future,” said LaRoe. “That’s why changing finance to finance change is a huge cornerstone in the plan to save our planet.”

In October, Wells Fargo joined the Net-Zero Banking Alliance. In the same month, Canada’s ‘Big Six’ which include the Bank of Montreal, Canadian Imperial Bank of Commerce, National Bank of Canada, Royal Bank of Canada, Bank of Nova Scotia and TD Bank also announced they were joining the alliance.