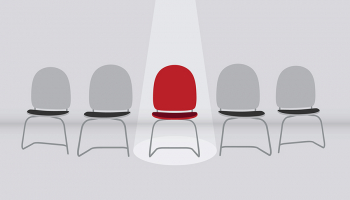 ABA — The American Bankers Association (ABA) has named nominees for its board ahead of elections in early October. Daniel Robb, president and CEO of Missouri-based Jonesburg State Bank, is the candidate for chair of the ABA board, while Julieann Thurlow, president and CEO of Reading Cooperative Bank in Massachusetts, has been named chair-elect.

The proposed vice-chair is John Asbury, CEO of Virginia’s Atlantic Union Bancshares, while Carissa Rodeheaver — chairman, president and CEO of Maryland’s First United Bank & Trust — has been nominated as treasurer.

Six further candidates for ABA’s board have been proposed:

If elected, the nominees will join ABA CEO Rob Nichols and 14 other bank bosses from across the country on the association’s board.

TowneBank — The Virginia-based bank has named William Foster III as its next chief executive officer. Foster will succeed Morgan Davis in the role on January 1, 2023.

Davis will remain at the company to assist the transition before retiring on March 31, 2023, but will remain on the board of directors, the bank said in a statement.

Heartland Bank and Trust Company — The Illinois-based company’s chief financial officer Matthew Doherty is to step down from his role at the end of 2022 as part of a phased retirement plan. He will remain at the company as treasurer.

Peter Chapman, previously executive vice president and CFO at Great Western Bancorp, is to join Heartland on October 1, 2022, and will succeed Doherty as CFO on January 1, 2023. Chapman worked for Great Western Bancorp from November 2012 until it merged with First Interstate BancSystem, in February this year.

Capital City Bank Group — Kimbrough Davis is to retire as chief financial officer after a 41-year career with Capital City Bank. Jep Larkin will succeed him in the CFO role from January 1, 2023.

Davis joined the bank in 1981 and has been CFO since 1987. He has overseen the bank’s growth from $200 million in assets when he joined to $4.4 billion, and has been involved in 16 merger or acquisition deals with other banks.

Larkin joined Capital City in 1986 and has held several credit and audit roles throughout that period. He is currently senior vice president and controller of Capital City Bank Group and a member of the senior management committee.

South Atlantic Bancshares — Chief operations officer Richard Burch left the South Carolina-based bank at the end of July. He also left his board director roles at the company and its subsidiary South Atlantic Bank.

In a statement, the bank said it did not plan to hire a new COO. Burch’s duties have been shared among other executives.

Atlantic Union Bank — Heather Cox has been appointed to the board of directors for Atlantic Union’s parent company Atlantic Union Bankshares Corporation. She was most recently chief digital health and analytics officer at Humana, a Kentucky-based health insurer. She was previously chief technology and digital officer at USAA, and has also worked in senior technology roles at Citi, Capital One, and E*TRADE Financial.

Simmons Bank — Maurice Butler has joined the Tennessee bank as director of community development, responsible for overseeing the bank’s Community Reinvestment Act plan. He will also have responsibility for Simmons Bank’s team of community affairs officers who focused on aiding underserved communities across the bank’s six-state footprint.

The First Bank — Ray Cole, CEO of Mississippi-based First Bancshares and its subsidiary The First Bank, has become chairman of both entities in addition to his existing role. He replaced Ricky Gibson in the role as of August 18. Gibson remains on the board, while Ted Parker has been appointed to serve as lead independent director.

Community Bank System — Joseph Serbun is to retire as president of retail banking after more than 14 years, during which time he has served in a number of roles including chief credit officer and chief banking officer. His retirement is effective from September 30, 2022.

MVB Financial Corp — Marston Becker has been named chairman of the board of MVB Financial. He replaces David Alvarez. Becker has been a board member since November 2020 and serves on several other financial services company boards. He is the former president and CEO of global insurance and reinsurance company Alterra Capital.