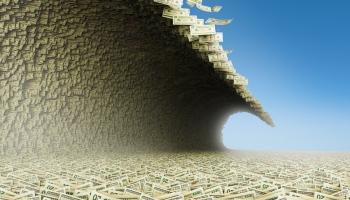 According to the Institute for International Finance, global debt levels will hit an all time high of $277 trillion by the end of 2020 and a debt to GDP ratio of a staggering 365%.

Due to the coronavirus, governments supported businesses and the general population with major stimulus packages pushing up borrowing and debt levels. Although interest rates are low for now, the figures do make a case for Republican caution on the level of the much needed next round of stimulus in the United States.

The IIF stated that so far in 2020 the global debt increased by $15 trillion while the European Union and the United States are likely to grow to even higher debt levels by year end. Developed nations’ debt to GDP is even higher than developing nations and is up 50% from one year ago, being led by the United States.

As high as the debt is due to coronavirus, debt had already been steadily rising for several years. While the Euro zone had similar debt levels during its sovereign debt crisis, the numbers now in Europe are similar and could grow even higher.

The question is what will happen to the housing market and the economy as borrowers potentially default on their debt accumulation. The IIF stated, “The pace of global debt accumulation has been unprecedented since 2016, increasing by over $52 trillion.” Larger debt levels do not lead to a healthy economic outlook down the road. Households will be more likely to default during an economic downturn as they look to service the debt. While more stimulus is needed now just to keep the economy going, many analysts do not have positive answers as to where this will leave the global economy in a few years.

As banks have given unprecedented grace periods to their customers, particularly for home mortgages and small business loans, at some point customers will have to start paying their monthly payments again.

Banks are bracing for a good percentage of their customers going into default in 2021 if the economy does not allow for the work force to pay down debt.