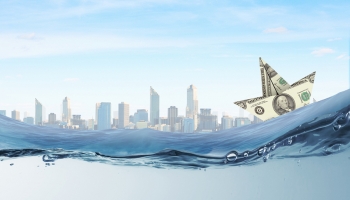 Several banks have sought to raise extra capital in recent weeks to shore up their balance sheets following a difficult few months.

As the COVID-19 pandemic has hit the US, banks have stepped up to increase support to individual and business customers.

While US regulators have temporarily relaxed some capital requirements to help these efforts, smaller banks have recently tapped the debt and equity markets to improve their access to capital.

For those issuing debt, the move comes as interest rates are at record lows, allowing companies to raise debt at a low cost. For equity fundraisers, the recent bull market and massive economic stimulus packages from central banks has boosted investors’ confidence despite the ongoing challenges of the pandemic.

The company said it expected to use the proceeds for “general corporate purposes” including capital expenditure and investment into subsidiaries.

Washington-based Banner Corporation raised a net $98 million through a subordinated debt offering last month, with an initial interest rate of 5%.

The $12.8 billion holding company, which owns Banner Bank and Islanders Bank, said it would use the proceeds for “general corporate purposes”.

The Victory Bancorp raised $10 million through a similar subordinated debt issue, placed privately with “institutional accredited investors”. The proceeds would help the Pennsylvania bank pay down other debts and invest in organic growth, it said in a statement.

Chairman and CEO Joseph Major explained: “This debt at the holding company can be moved to the bank as capital and provides a strong base for continued growth without the dilutive impact of issuing new shares of stock. Additionally, the tax-deductible nature of the instrument, combined with a low-interest rate, makes the overall cost of capital quite attractive.”

Delmar Bancorp, parent company to The Bank of Delmarva and Virginia Partners Bank, raised $17.8 million through a subordinated debt offering with a 6% interest rate. In May the bank listed on the Nasdaq Capital Market.

In a joint statement, CEO Lloyd Harrison III and chief operating officer and company president John Breda said the capital raising exercise would “give us additional strategic flexibility as we seek to expand the ‘family of community banks’ model within the mid-Atlantic region”.

Last month, the Federal Reserve announced temporary restrictions on banks paying dividends to shareholders or buying back shares to ensure their capital reserves were maintained ahead of expected losses on loan books.

Several small banks were added to FTSE Russell’s small-cap equity benchmarks at the end of June in the company’s latest reshuffle of its indexes, aiding the companies’ access to capital from third-party investors.

CEO Tim Schneider said: “This membership is an important milestone for County Bancorp as we continue to execute against our strategic priorities and serve our customers and communities.

“We believe our inclusion will positively impact the liquidity in our stock and create an opportunity to increase our exposure and share our compelling story with a broader investment audience.”

Californian community bank Plumas Bancorp has joined the Russell 2000 index, which CEO and president Andrew Ryback said would increase the bank’s “visibility and exposure to the investment community”.

FNCB Bancorp, headquartered in Pennsylvania, has joined the Russell 2000 index.

Approximately $9 trillion of investment capital is benchmarked against FTSE Russell’s US indexes, according to the provider.