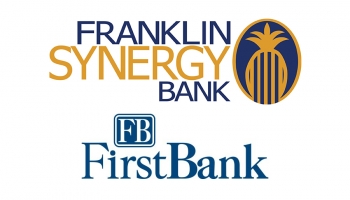 FB Financial Corporation and Franklin Financial Network have agreed to a merger in a deal worth approximately $611 million.

The combination of the two Tennessee corporations will create one of the state’s biggest community banks, according a joint statement from the companies. FB Financial owns FirstBank while Franklin owns Franklin Synergy Bank.

Franklin is headquartered in the city of Franklin, Tennessee, and has 15 branches in Williamson, Rutherford and Davidson counties. FirstBank – which also operates in Alabama and Georgia – said the merger would “significantly enhance” its operations in the Nashville area of Tennessee, especially in Williamson and Rutherford counties.

FB Financial president and CEO Christopher T Holmes said: “We are joining forces with the leading community bank in two of the most attractive counties in our market area. We look forward to building on the strong customer relationships that Franklin has fostered.”

J Myers Jones III, CEO of Franklin, added: “We believe that this transaction benefits all of our stakeholders, and we firmly believe that we will be better together. Our focus will remain concentrated on our customers, and our ability to serve their needs will be stronger than ever.”

FB Financial’s Holmes said the merger would provide his company with “meaningful earnings accretion” while having a neutral impact on its book value per share.

“As in every combination, protecting the balance sheet is paramount, so these financial returns come after taking a conservative approach to the balance sheet,” he said. “We are assuming a 3.9% mark to loans. We are also assuming 30% cost savings, even though we have significant overlap in our respective branch networks.”

Holmes added that the merged company would “accelerate” Franklin’s existing strategy of exiting “non-strategic assets” and growing its core business. This included approximately $430 million worth of shared national credits and non-strategic healthcare and corporate loans. The proceeds would be used to pay down non-core funding, according to FB Financial.

According to the joint statement, key Franklin executives have agreed to remain with FB Financial following the completion of the merger. Three members of Franklin’s board are to be appointed to FB Financial’s board of directors.

Upon completion, FB Financial plans to set up a primary operations center and a mortgage headquarters for the combined company at Franklin’s existing corporate headquarters in downtown Franklin, Tennessee.

The merger is subject to regulatory and shareholder approvals.

The merger follows an eventful year for FB Financial. In September it bought Farmers National Bank of Scottsville in a deal worth almost $52 million, expanding FirstBank’s presence into Kentucky, while in April the group acquired 10 branches in Tennessee and Georgia from Atlantic Capital Bank.