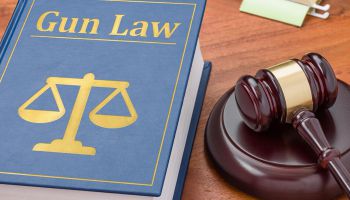 Scandal-plagued Wells Fargo & Co. finds itself further scrutinized after its decision to maintain all ties to gun manufacturers, even as competitors step back amid a national debate over gun control.

At the bank's annual meeting in late April, Wells President and CEO Timothy Sloan was pressed to reduce lending to corners of the weapons industry. But unlike its peers—Bank of America Corp., Citigroup Inc., and JPMorgan Chase & Co.—Wells executives said they will continue with business as usual.

Critics were not satisfied with the hands-off stance. Sister Nora Nash, who represents Wells investor Sisters of St. Francis of Philadelphia, referred to a recent Bloomberg report that said Wells is the biggest U.S. lender to gun makers and also is the National Rifle Association's main bank. She called on the company to curtail its lending and ensure it does not support makers or sellers of weapons of war to the public.

"Our company must not be financially associated with manufacturers of military weapons, assault-style weapons," said Nash, who serves on Wells' stakeholder advisory committee.

Other banks have faced similar pressure in the aftermath of a mass shooting at a Florida high school that left 17 people dead—one of dozens of such lethal incidents across the country in recent years. Advocacy groups, at times in concert with shareholders such as Nash, are pushing big banks to influence policy on everything from guns to gender pay inequity to climate change.

In April, BofA said it would cease lending to companies that manufacture assault-style guns used outside of the military. A month earlier, Citi put new restrictions on its business customers that sell guns. New retail clients with Citi must prohibit gun sales to customers who have not passed background checks and to those who are younger than 21. Citi also disallows sales of bump stocks and high-capacity magazines that can be used to rapidly expel ammunition.

The new policies are "intended to preserve the rights of responsible gun owners" while "relying on best sales practices to keep firearms out of the wrong hands," Citi CEO Michael Corbat said in April at the company's annual meeting.

JPMorgan's connections to gun manufacturers "have come down significantly" in recent years "and are pretty limited" as the company continually refines already "robust" risk-management policies for lending to gun makers, CFO Marianne Lake told reporters after the bank posted earnings in April.

In other parts of the financial sector, some of the country's largest investors in firearms manufacturers have pledged to work with those companies to curb gun violence.

Jordan Ash of the St. Paul Federation of Teachers told Sloan and other executives that the bank is failing to play its part. "We must stop the gun violence epidemic in our country," Ash said.

Sloan countered: "We don't think it's a good idea to allow banks to decide what products and services Americans can buy."

If Wells—or any bank—takes a big stand against gun sales, it could face a backlash from consumers, business owners, and lawmakers that staunchly support the Second Amendment to the U.S. Constitution, which provides for the right to bear arms.

In letters to Citi and BofA, for example, Sen. Mike Crapo, R-Idaho, reprimanded both banks for their shifts on gun lending policy.

Crapo, chair of the Senate Banking Committee, said the banks' moves were "deeply concerning" because they amount to BofA and Citi using "their market power to manage social policy by withholding access to credit to customers and companies they disfavor."

But at the same time, Wells risks seeming tone deaf to the outcries for change from school shooting survivors and others.

"I view it as a lose-lose situation," Matthew Shields, a managing director at bank adviser Performance Trust Capital Partners, said in an interview.

The dilemma comes at a precarious time for Wells. For 20 months it has been grappling with a sales scandal that came to light in 2016. The bank conceded that its retail staffers opened as many as 3.5 million phony accounts to meet aggressive goals. It also has unearthed problems in its wealth management, mortgage and auto insurance operations, among others. [BE Editor’s Note: Subsequent to S&P Global Financial posting this story originally, stories broke May 17 regarding allegations that Wells employees had altered business customer documents.]

The Federal Reserve earlier this year issued a consent order that indefinitely requires Wells to limit its size to under $2 trillion in assets. The Office of the Comptroller of the Currency and the Consumer Financial Protection Bureau followed with additional orders and $1 billion in collective fines. Wells in recent quarters has struggled to win new customers and grow revenue.

Martin Zorn, president and COO of credit and market risk consultancy Kamakura Corp., said in an interview that the gun lending predicament comes alongside already notable financial and reputational challenges that have put Wells at a disadvantage when compared to its peers.

"Definitely," he said, "its risks have increased."

This article originally appeared on S&P Global Market Intelligence’s website on May 7, 2018, under the title, "In US gun debate, Wells stands apart from big-bank peers"