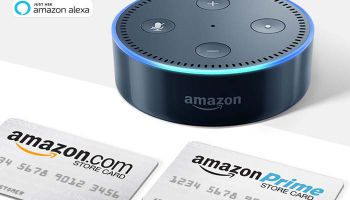 As of May 2, with those four short words holders of Amazon Store Cards who also own some variation on Amazon’s Alexa voice assistant can perform basic voice-based functions with their cards. These range from making payments to checking a payment’s status to tracking purchases and spending.

First skill out of the box

Development of the “skill,” as such functionalities are called on Alexa, came not from Amazon but from Synchrony, the consumer financial services company that is parent of $79 billion-assets Synchrony Bank.

Synchrony’s innovation labs wanted to begin developing Alexa skills for the retailers and others for whom it offers cards and financing programs, according to Tim Christensen, senior vice-president of IT Innovation and Digital at Synchrony. The company is the largest provider of private label credit cards in the U.S. and offers credit and financing programs for customers of many business partners.

“We go to market through our partner’s brands,” Christensen explains. The Amazon web page that promotes the new skill doesn’t play up Synchrony’s involvement, as the Amazon Store Card is part of the online retailer’s brand.

The effort began with experiments attempted during one of Synchrony’s quarterly hackathons. Then the project was handed over to internal developers for further work. The skill that was unveiled last week represents a first release, according to Christensen. He says that Synchrony wants to find out what types of transactions users feel comfortable performing by voice on Alexa and which they aren’t as interested in doing by voice.

Recognizing that Alexa-equipped devices are typically in open areas in homes, such as the kitchen, and always “on,” “we’ve started this with safe, low-risk transactions,” says Christensen. In an effort to add an additional layer of security, he adds, the company includes creation of a four-digit “voice key” in the setup routine.

Christensen says that developing a skill is much like developing an app. Underlying both are web services routines that are built on APIs (application programming interfaces). One of the challenges for building voice applications is figuring out how different customer will phrase a particular need, such as finding out their balance. Different platforms offer their own “intent engines” which interact with the core API leverage.

Working with Alexa is just the beginning, according to Christensen. “We are looking at all the voice assistants out there,” he says. “We want to be where our cardholders are, so we are going to explore all of them.”