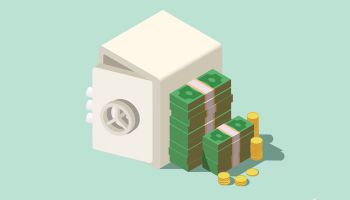 Bank M&A activity should continue at a healthy pace but a wave of transactions seems unlikely, in part due to the passage of tax reform.

Bank stocks multiples have continued to rise and there were hopes that the resurgence in valuations would lead to stronger bank M&A activity, but 63 transactions have surfaced through mid-April. That is down slightly from the same period in 2017, when deal volumes failed to reach the level that some bank deal advisers had expected.

The expectations for stronger deal activity came after bank stocks jumped close to 30% in the months following the 2016 U.S. presidential election, leaving many would-be acquirers with stronger currencies. Investment bankers expected the increased purchasing power in the marketplace to support even stronger deal activity in 2017. More deals did occur, with the number of transactions rising to 261, or 8% higher than 2016 levels.

Bank stock currencies have moved even higher in 2018 as investors expect stronger earnings stemming from tax reform. The SNL Bank & Thrift Index has traded at an average price-tangible-book value of 207% this year, compared to 190% in 2017, but that has not translated into a material increase in deals.

Rick Childs, a partner in the financial advisory services practice at Crowe Horwath LLP, said the banking industry will produce consistent M&A activity, with close to 250 deals surfacing each year, but he never expects to see the "tidal wave" of deals that some advisers predicted.

"It will be consistent. I just don't know if it ever will be an explosion," Childs said at the annual community bankers conference hosted by S&P Global Market Intelligence on April 12 and 13.

Childs and other presenters at the event said there remains plenty of interest in deals as buyers look to build their deposit bases. Sellers, meanwhile, face succession issues and some other institutions might consider exiting before another credit cycle occurs.

Childs said banking is an aging industry that has struggled to find younger people to take over the top spots at institutions. Even if banks have appropriate succession plans in place for CEOs, they do not have good plans for directors, he said.

Patrick Ryan, president and CEO of First Bank in New Jersey, added that banks lack the "cool" factor that some other institutions have and that limits institutions' ability to attract new talent.

He further noted that regulatory costs should continue to drive M&A activity even with the prospect of regulatory relief on the horizon. The executive said banks often feel like they have been "beaten up" over things they see as reasonable and years of arduous examinations could push some banks to consider selling.

Ryan said sellers, particularly those with strong core deposit franchises, might find even more motivated buyers knocking on their doors as they seek to build their funding bases. They might present some banks a good time to sell and avoid living through another credit cycle, he said.

"I think you may see an uptick in activity because of people wanting to get out," Ryan said at the event.

"On the seller side, maybe it's FOMO," Goldfarb said, referring to the “fear of missing out”—"I was here last cycle and the cycle before that."

For buyers, Goldfarb said a number of banks might pursue acquisitions to drive earnings growth. While economic growth could improve, many bank observers expect credit costs to rise, resulting in a headwind to earnings. As that occurs, increases in interest rates will lead to higher deposit costs and possibly thinner net interest margins, at least for institutions with funding bases not prepared for the change in the rate cycle.

Such earnings pressures could push some well-capitalized banks to consider acquisitions to support future growth.

Some pressures to sell are easing, however, as the lower tax rate stemming from the passage of tax reform will provide a considerable boost to bank earnings and leave many institutions with returns that their boards now deem adequate. The prospect of regulatory relief might tip the scales even further and encourage some institutions to remain independent.

"Taxes and regulatory relief might actually hurt M&A because they are no longer headwinds," Childs said.