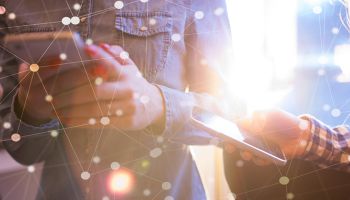 The human element may come to play a greater role in nonbank online lending.

While the merits of the proposed fintech national banking charter continue to be debated in Washington, online nonbank business lenders haven’t been circling in a holding pattern over Reagan National Airport.

Instead, as a panel at the recent LendIt Fintech conference demonstrated, they are not only aggressively working their niches in business credit, but sparing an eye for how their activities could expand in the near future. In addition, they are looking at credit quality as much as traditional lenders are.

Case in point: The business of lending isn’t lending, but getting paid back, said Andrea Gellert, chief revenue officer at OnDeck, the largest online small business lender in the U.S.

That may (or should) seem obvious to commercial bankers, but Gellert and fellow panelists acknowledged that their sub-industry was born in an economy that has been on a long-term upswing.

“The rubber meets the road when there is a change in the economic cycle,” Gellert continued. Victoria Treygar, chief revenue officer at Kabbage, agreed, saying that her company expects to start seeing a turn in the credit cycle over the next couple of years.

While part of the panel discussion concerned how to accomplish real-time credit approval, the discussion among four companies in this space revealed that their thinking grows deeper than instant answers—in fact, for one of them trained human advisors play a part in ongoing relationships with borrowers. Still, the appeal of instant approval remains a key part of their success at this point.

Even before the Age of Amazon, people have had a strong appetite for instantaneous fulfillment of their wishes. Business borrowers have that, too, and also, sometimes, utter necessity.

“Remember, these are businesses such as coffee shops and hair salons,” said Homam Maalouf, data science and insights lead at Square Capital. “If their equipment breaks, they don’t have a business.”

Square Capital currently lends to businesses that use Square payments services. This relationship provides part of the data that enables the lending operation to evaluate prospective borrowers’ credit.

“One thing all small business owners have in common is that they are very short on time,” said Treygar. Kabbage lending has become available as a mobile app in addition to its traditional online format and Treygar said the lender is seeing a growing number of customers applying for credit for specific needs “on the spot” using the app.

In fact, as much as companies want the credit offered by Kabbage, OnDeck, Square, and Intuit’s QuickBooks Capital Direct Lending—the fourth firm represented on the panel—even receiving a turndown quickly can be important.

“A fast ‘no’ is really helpful to them,” said OnDeck’s Gellert. “The worst thing you can do to a small business is to not tell them ‘no’ when you know that the answer is ‘no’.”

“Stronger business credit allows you to do that,” Gellert said, explaining that OnDeck shares information with credit bureaus to help establish those separate identities.

Pro’s and cons of alternative data

One of the criticisms of traditional credit bureaus is that they have typically relied on backward-looking, historical data. One of the elements of fintech lenders has been use of alternative indicators intended to give a glimpse of the future.

Kabbage’s Treygar spoke of the real-time data her company taps via data feeds that factor into its forward-moving understanding of how borrowers’ firms are doing. Data on UPS shipping volume and fuel consumption and cost data, for example, “can tell you exactly what you need to know about that business,” Treygar explains. Kabbage has over two million live data connections, with each borrower representing five to ten of such connections.

“Alternative data sources have been proven to work to predict credit,” said Luke Voiles, director at QuickBooks Capital, which lends to users of QuickBooks accounting software. (Currently the company caps loans as $50,000.) The input the firm can access provides a strong picture of how a business is doing and may be doing in the future. Gellert said that as loans grow larger, OnDeck adds in methodologies derived from behavioral economics.

Using alternative data is not a cut-and-dried discipline, as compared to usage of traditional credit data that has generated time-tested credit ratios. Voiles said that “you need a massive data set to see which factors are of the ultimate benefit.”

Treygar noted that Kabbage, which will now lend as much as $250,000, began financing small companies that sold goods on eBay or through Amazon. Now, with that larger maximum, borrowers can be much larger players. Treygar noted that lending to bigger borrowers via nontraditional data can actually be easier than to smaller firms because there is a greater flow of data available concerning their ongoing activities.

By contrast to Kabbage’s philosophy, Voiles said that QuickBooks prefers a blend of old and new sources.

“I don’t know how you make a loan without backward-looking data,” said Voiles. “Sure, you would like more alternative, future data. But you need that foundation of history to predict the future.”

OnDeck’s Gellert acknowledged that instantaneous, real-time approval can be something of an approximation. The approval may be fast, but it may, depending on the lender, come with multiple stipulations concerning the borrower’s affairs that must be met prior to funding.

Bankers might suggest that this is where having an experienced, trained lender or relationship officer would help. That’s not lost on fintech players.

On its website OnDeck promotes the fact that it offers trained advisors who can chat with customers, an element that somewhat contrasts with the conception of fintech lending as a credit vending machine.

But customers do like to be able to talk to a person, said Voiles, and not just for strategic assistance.

Panelists were asked to predict the shape of future competition, and their view on which players will win the struggle for market share. To a degree, they felt it was early to make any predictions. Square Capital’s Maalouf, for example, said “the pie is expanding” and that many players thus would see more business.

“No one can look at this business and say that we are plateauing,” Maalouf continued. “We have quite a bit of room to go.”

Likewise, Voiles of QuickBooks said “there’s a huge appetite for small business credit” that remains to be met.

OnDeck’s Gellert, however, believes there won’t be new entrants into this specialty.

“I think we are past the point of a lot of people starting new lending businesses,” she said. Much capital is required to get a new lender up and running, and it seems more likely that partnerships will continue to be formed between fintech lenders and traditional lenders. OnDeck already works with JPMorgan Chase, and some members of the panel work with each other for some types of business.

The possibility that fintech lenders will grow beyond their current types of credit and perhaps beyond credit alone represents another possibility. Kabbage’s Treygar, without getting into specifics, said expanding data points would expand the firm’s product lineup.

“That will be the next key evolution,” she said.