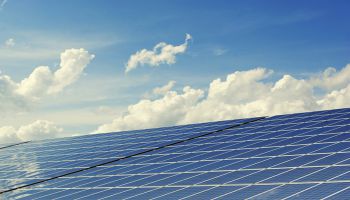 Community banks with "values"-based business models appear to be growing assets faster than many peers but lagging in profitability.

S&P Global Market Intelligence analyzed the performance of U.S. banks in the Global Alliance for Banking on Values, or GABV. The alliance, founded in 2009, is a network of financial institutions advocating for social, economic, and environmental sustainability in banking. There are 46 member institutions across the world, including seven banks and three credit unions in the U.S.

During 2017, six of the seven U.S. GABV member banks posted a return on average assets lower than the median of the 5,000-plus banks and thrifts with less than $5 billion in assets. In 2016, all seven came up short of the median ROAA, but many of these GABV members posted higher net interest margins than the industry.

The deal will push Amalgamated Bank's assets closer to $5 billion. Amalgamated President and CEO Keith Mestrich said the acquisition will deepen the bank's focus on environmental causes, since New Resource strives to invest the majority of its loan portfolio in organizations that are advancing sustainability. 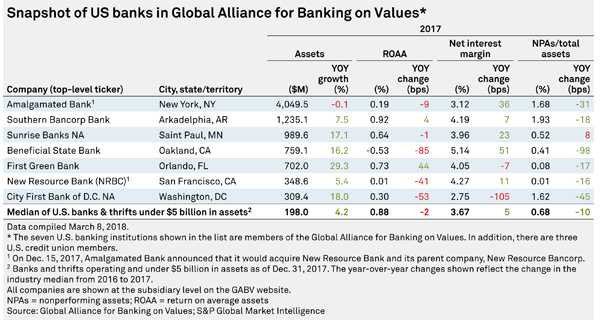 GABV senior adviser David Korslund said the organization was founded at a time when it was clear there was "something fundamentally wrong" with many large-bank business models. Its founders included banks that, at the core of their banking business models, had "a focus on delivering value for society" rather than on "how to raise money for shareholders."

To join the GABV, Korslund said banks must prove they are profitable.

"We're not charitable institutions," he said. "But we're focused on starting with the premise that you need to create value for society."

Some executives at GABV member banks say their focus on social and environmental issues is helping, not hindering, their bottom lines.

Since its inception in 1962, Reiling said Sunrise Banks has aimed to serve immigrants and offers "open-door" mortgages for individuals who may have an individual tax identification number but not necessarily a Social Security number. "[W]e're helping them build their credit history," he said.

Kenneth LaRoe, chairman and CEO of Mount Dora, Fla.-based First Green Bancorp Inc. and a GABV founding member, said the country's values-banking landscape is small. There are "some amazing banks out there that are not [GABV] members, but not very darn many."

LaRoe founded First Green Bank in 2009. Among other initiatives, the bank offers discounted rates on environmentally friendly commercial and residential building projects, and a loan program to encourage customers and employees to install solar panels. He was previously chairman and CEO of Florida Choice Bankshares Inc., where he said he considered implementing a values-based approach. Ultimately, he said he was "afraid to push the envelope," for fear of criticism from the company's shareholders and board.

“That's good for everyone”

Of course, financial institutions do not have to be GABV members to take part in their communities and engage in charitable giving. Brittany Kleinpaste, director of economic policy and research at industry trade group the American Bankers Association, said a focus on values has long been part of the community bank business model.

And credit unions, which are not for profit, are geared toward helping members save, borrow, and access affordable financial services—values largely in line with what the GABV promotes.

"They are a business [and] they must make profits, but [they are] structured as a cooperative," Jill Tomalin, deputy chief of staff and COO at the Credit Union National Association trade group, wrote in an email. "[A]nd because of their values and principles, they do not need to maximize profit at the expense of member interests."

This focus on factors outside of profitability can have a positive impact on employees, too. Reiling, the CEO of Sunrise Banks in St. Paul, suggested a values-based approach helps in recruiting the "best and the brightest" talent. "You're not only talking about earning a good living, but you're also talking about that emotional paycheck, about meaning in your life and value in what you do every day," he added.

He said the work his bank does is nonpartisan.

"Who doesn't like a loan to a small business that creates jobs—particularly living wage jobs?" Reiling said. "That's not really a political issue. That's good for everyone."

This article originally appeared on S&P Global Market Intelligence’s website on March 14, 2018, under the title, "In values-banking landscape, profitability not the only objective"