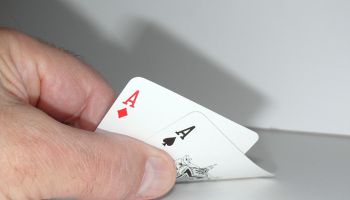 Like Beanie Babies and AOL, many community banks and credit unions established in the 1990s have vanished from the U.S. commercial landscape. And since then, the formation of new institutions has fallen off due to the financial crisis and increased regulations.

This means the vast majority of assets remain in the hands of older community banks and credit unions—ones that opened before 1990.

"My guess is that this is mainly due to the ongoing consolidation trends in the banking industry," said Joe Maloney, an analyst at Banks Street Partners LLC.

When a bank grows to $500 million or $1 billion in assets, it starts to become very attractive to acquirers, he said in an interview. Then it is increasingly likely to be absorbed into a larger institution, as the quick premium from a takeout becomes more attractive than the long slog of continued organic growth. 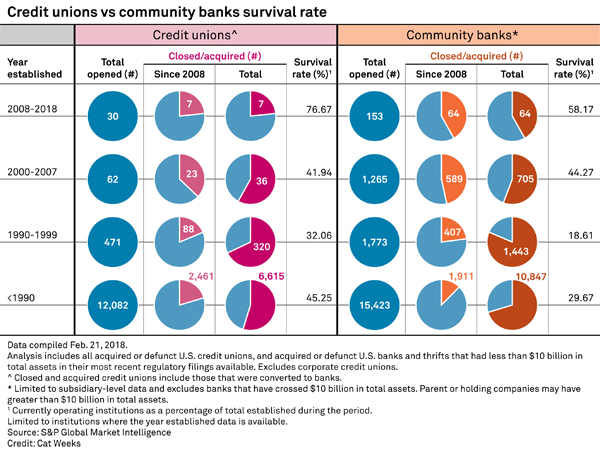 This dismal record may have helped drive down interest in opening new credit unions and community banks in the past 18 years.

Only 62 new credit unions were formed between 2000 and 2007, and about 58% of those have been merged or closed. During that same period, 1,265 community banks were chartered, although only about 44% of those are still operating.

Since 1990 there have been 979 community banks established that are still operating, but only 200 new credit unions that formed during that time are still standing. 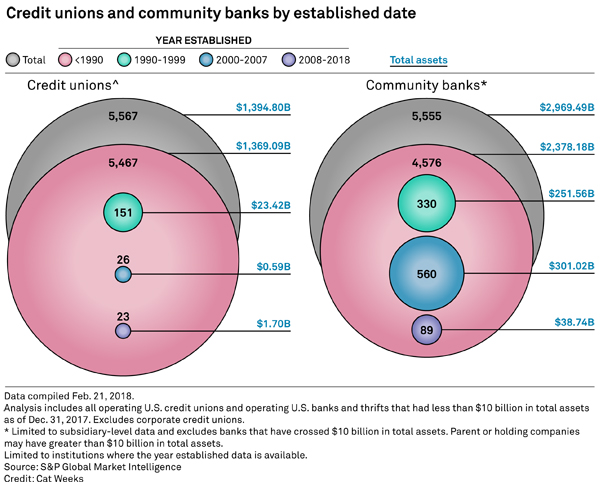 Dennis Dollar, a credit union consultant and former National Credit Union Administration chairman, said the dearth of new institutions is due to the fact that there is no financial incentive to charter a new credit union like there is with chartering a de novo bank.

"You can't build it up and sell it to a larger bank for a nice profit," he said in an interview.

Unlike banks, a de novo credit union must have a field of membership that can generate enough business and earnings to build the necessary capital to be a going concern. Plus, start-up credit unions have to build this net worth through retained earnings and cannot tap capital markets like start-up banks can, Dollar said.

This can greatly restrict a new credit union's ability to build its safety and soundness position in the early years, a fact that can drive many employers, associations, faith-based organizations and underserved communities to affiliate with a more established institution, according to Dollar. "It is tough to build a start-up credit union," he said.

As of Dec. 31, 2017, the three largest U.S. credit unions—Navy FCU, State Employees' CU and Pentagon FCU—held 10.8% of the industry's total assets, and all three of those institutions were established prior to 1990. 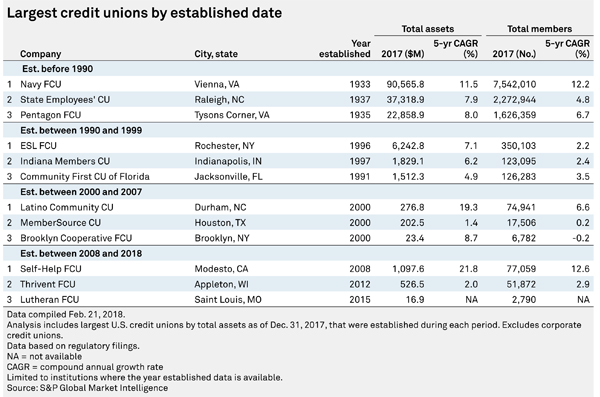 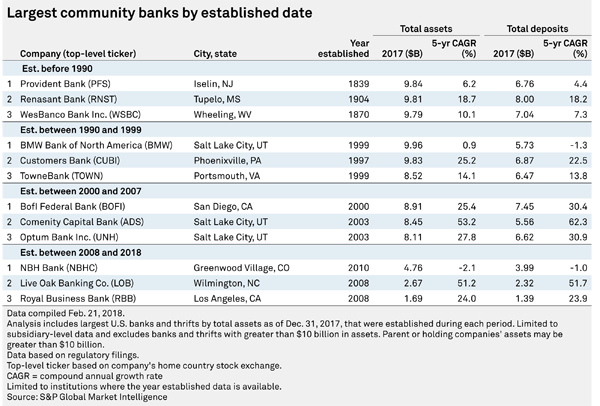 This article originally appeared on S&P Global Market Intelligence’s website on March 13, 2018, under the title, "Majority of assets in hands of older community banks, credit unions"