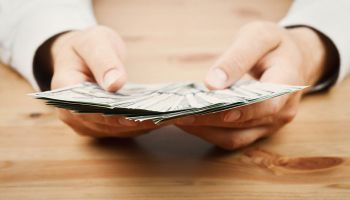 This is the third part of a series presented annually by Crowe Horwath on BankingExchange.com in banking compensation trends.

Leadership development is a critical concern for banks of all sizes. Attracting, developing, and retaining effective leaders— in the executive suite and on the board of directors – are always priority issues, but a recent survey suggests banks differ significantly in how they approach the challenge.

Every year, Crowe surveys banks throughout the United States about compensation trends, benefits, incentives, and other human resource issues. The 2017 survey drew responses from 375 banks, representing a cross section of the industry by size and geographic location.

The most recent survey results indicate several somewhat surprising differences in the way banks of various sizes address the need to develop strong, effective leadership. For example, the issue of CEO succession appeared to be a greater concern at the smaller banks participating in the survey. Among banks with $250 million or less in assets, 70.6% reported they had documented, board-reviewed plans for CEO or other top-level executive succession. 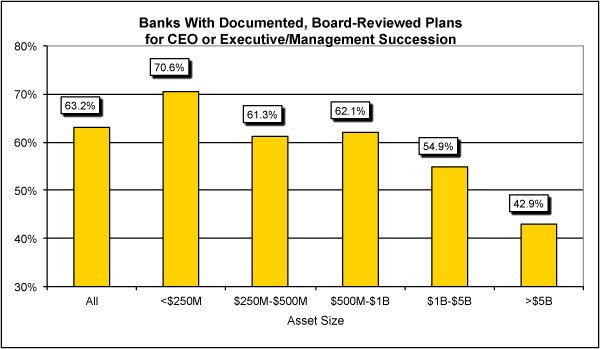 That number declined steadily as the responding banks grew in size. Among larger banks (those with $5 billion or more in assets), only 42.9% of survey respondents said they had documented CEO/executive succession plans in place.

Similar trends can be seen when comparing survey responses according to the size of the community in which the bank is located. Two-thirds (67.0%) of the banks headquartered in communities with populations lower than 100,000 reported they had documented CEO/executive succession plans. But among banks headquartered in larger communities (greater than 100,000 in population), fewer than half (48.8%) had such plans in place.

Several factors could account for these size-related differences. For example, community banks with smaller executive teams will have a smaller pool of potential CEO successors within the organization, and thus are more likely to be concerned about how they would handle a change in the top executive office. It also is possible that this issue attracts greater regulatory attention among smaller banks.

Altogether, 27.9% of all responding banks reported they had a formalized leadership development process in place. Among banks with less than $250 million in assets, though, only 15.8% reported having such a process in place, while midsize and larger institutions were more likely to have implemented such a process.

In this instance, it would appear that as banks grow larger and begin to gain access to greater resources, they are better able to dedicate a portion of those resources to the ongoing development of their leadership teams. Such programs also have obvious appeal as a tool for retaining talented employees, enabling them to envision a promising career path within the organization.

Board development: attention at the top

Succession planning and leadership development also are of concern at the board level, and in this case, the focus appears to intensify as banks grow larger. Among the largest banks in the survey (those with $5 billion or more in assets), 57.1% reported they had implemented an organized effort for finding new board members, while 40% to 43% of the midsize banks had such efforts. Among the smallest banks in the survey ($250 million or less in assets), fewer than a third (32.8%) said they had an organized board recruitment effort in place. 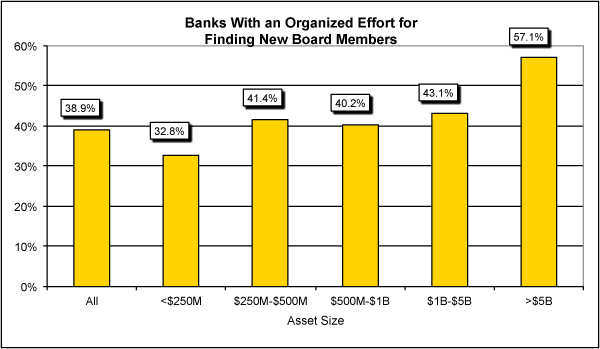 Among all survey participants nationwide, the average total annual compensation for outside bank directors (including retainers and meeting fees) was $24,149. As might be expected, this figure also varied according to the size of the organization, with the smallest banks lower than the national average by almost $10,000.

But the survey also suggests that smaller institutions are working to catch up with the national average. About a quarter (25.2%) of banks under $250 million reported they raised director compensation within the past year. That number gradually declined among the larger banks. Only 14.3% of banks with more than $5 billion in assets had raised director pay within the past year. 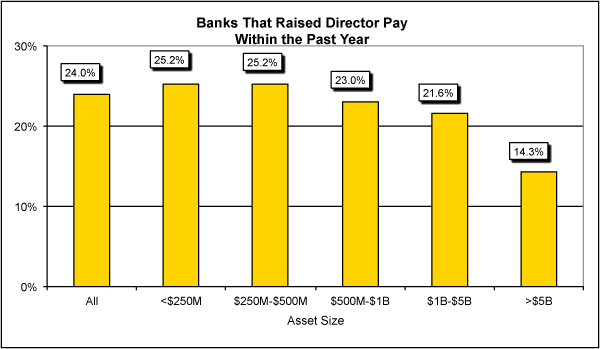 Although compensation is a factor in attracting qualified and productive board members, it presumably is not the primary factor. Historically, bank directors are recruited on the basis of their business experience and perspective, as well as their connections to the local community. Generally speaking, such individuals are more likely to be attracted to the board by the prestige and networking opportunities associated with being board members, as well as the broader opportunity to help shape the future of the organization and their community.

As the industry continues to evolve, however, more banks are recognizing the need to broaden their outreach efforts to incorporate other factors. In particular, the most successful organizations will recruit candidates who can help the bank adapt to the challenges of digital technology, which is playing a progressively larger role in the banking industry. Direct experience in other technology-intensive businesses is likely to be an increasingly important attribute.

Industry experience also suggests there is an ongoing demand for directors who understand good governance practices, and have successfully implemented such practices in other organizations. A growing number of banks also are making a concerted effort to recruit directors who truly are representative of the bank’s customer base, from both an economic and demographic perspective. Such board members can bring added perspective and understanding of the needs of various customer segments, and thus make the bank’s strategy and business development efforts stronger and more effective.

Timothy Reimink is managing director at Crowe Horwath LLP. You can reach him at 616-774-6711, [email protected]