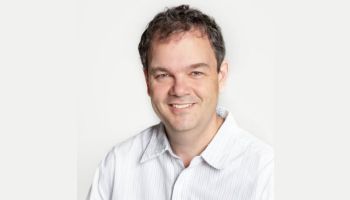 Tony Barnes works at Capital One Labs, but he doesn't consider himself to be a banker.

A passion of Tony Barnes is driverless cars. He can’t wait for them to become ubiquitous, but for now the most he can generally do in New York City is talk about them. The people Barnes speaks to about driverless cars are drivers for Uber, the disruptive app-dispatched car service that is giving the city’s traditional cabs more than a run for their money.

Talking to people who make their living driving other people around about driverless cars sounds, at first, like a good recipe for a short conversation. Or even for being dropped off next to a puddle. But Barnes, who is vice-president of innovation tech at Capital One, has found kindred spirits among the Uber drivers.

Barnes says the drivers don’t feel tied to their current jobs. Instead, they think forward about driverless vehicles, and see themselves someday as owners and operators of fleets of such transport. They see their future in the deliverable, not the means.

That mindset begins to describe Barnes as well.

Capital One took space on New York’s Fifth Avenue for Capital One Labs early last year. Barnes, by background an aerospace engineer and computer scientist who spent years at Dell and as chief technology officer at Bluefly, came aboard in mid-July. He heads up innovation specifically for small- and mid-sized businesses, an area of banking that remains buried in paper and old approaches.

Barnes believes the time is right for that to change.

“We’re at the stage now where the technology is ready and we’re ready to step up to the challenges,” says Barnes. Past reticence on the part of businesses (and business bankers) to adopt technology wholesale is going to go away because security concerns are being addressed and friction is easing in the payments area, according to Barnes.

That, and the inevitability of generational change.

Barnes points out that more and more millennials are rising to higher posts in traditional companies, or founding their own companies. They bring the willingness—their preference, really—for tech channels and solutions of their personal lives to the office, even if that office happens to be wherever their laptop is opened.

“There was a tremendous amount of conservatism,” says Barnes in an interview with Banking Exchange in the New York lab. Already, he says, he has a solution that relies on big data in the hands of some Capital One clients, and he sees that as just a beginning.

Capital One Labs has few surprises for the visitor who has seen a financial lab before, though it exudes cool. The company has two floors, soon to be three, ripped out from a former apartment building. Individual workspaces, on an open floor plan, typically feature a desk that can rise for standing work or lower for sitting work, each outfitted with oversize Mac monitors. A video game room, snack bars and food service areas right at hand, nestled in a vibrant, trendy part of Manhattan—all fit with the idea of an innovation space free of traditional banking walls and roles.

An attempt to put a cargo shipping container on the main floor for atmosphere went awry, but the idea stuck and an outside firm built faux container sections that are a centerpiece for one of the lab floors. There isn’t a soul in a suit (except the Banking Exchange reporter).

All that’s by design, pretty typical for the innovator/disruptor space. There are even some 3D printers around, for experimentation.

But let’s look a bit deeper than décor and meeting rooms and work zones named after NY neighborhoods (“Dutch Kills” and “DUMBO”), teams (Rangers), museums (MOMA—Museum of Modern Art) or other gotham labels. 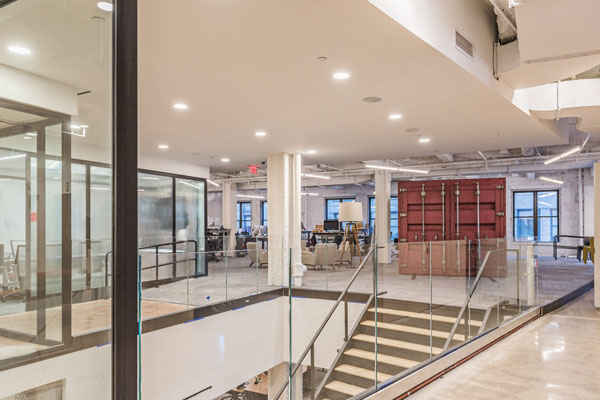 No banking experience appears on Barnes’ LinkedIn page, and you won’t likely find much, if any, on any of the resumes of people he works with at his portion of the multi-functional lab.

“We aim to be a tech culture supporting a commercial bank,” says Barnes, who considers himself a technologist, not a banker. He doesn’t see the work of his group as being entirely applied science—work specifically for stated goals—nor pure science—just going wherever technological curiosity and interest takes them.

Barnes sees a blend of the three driving his operation.

Increasingly, he says, innovation is not an option for any institution that wants to remain competitive. “If you are not changing on a regular basis, you are risking being disrupted,” Barnes insists. So there has to be some direction, some aim.

On the other hand, says Barnes, “we want to enable people to try new things.”

And this is a time when there are all kinds of new things arising, it seems, daily. The three key broad areas of interest and potential to Barnes are the blockchain, the cloud, and big data. Paradoxically, all three are frequently misunderstood by business executives, Barnes notes.

Even in the industry, the momentum behind these technologies will result in massive change, in time. “Hands down, nothing else will disrupt banking like big data will,” says Barnes.

So, in terms of moving forward, Barnes says his team typically works on projects in increments of four to six weeks. At the end of that time, everyone regroups and assesses what’s been learned so far. Some ideas may not be headed anywhere. Some may be great ideas, but they don’t fit into Capital One’s framework, nor any logical extension. But others may be great ideas that fit the needs of Capital One’s business customers. That merits more time and money invested, and, in time, moving them from concept to prototype to product.

Not everything will be a success, and some ideas will take gear shifts to find a way to make them work.

“I believe that if we only do successful projects, we aren’t trying hard enough,” says Barnes.

Some ideas will run into that bane of banking—regulation. But Barnes recognizes that that factor is there.

“We try to innovate without barriers,” he explains. “We’re trying to find technology solutions to banking problems.”

Recruitment is something constantly on Barnes’ mind, to feed the innovation process he has been developing and to solve those problems.

Who is he looking for? Ideally, he says, it will be someone where the conversation begins with, “Sorry, I don’t see myself working for a bank.”

When he runs into the “I’m not a banker” objection, Barnes plays the Capital One card. That is, he speaks to the company’s history of disruption in its own businesses.

And he points out how the company is part of the innovation community. For example, he mentions how, last year, CIO Rob Alexander was a keynote speaker at Amazon’s re:Invent Conference.

And, he admits, he needs them. New York City is highly competitive for tech and fintech talent.

There’s a sense of urgency. Lots of major banks, nonbank fintech players, and daily startups are fighting to find the best solutions. While much of this has been in the retail financial space, an increasing amount of it is now in commercial financial services.

Within a decade, Barnes estimates, the transition to digital commercial banking will largely be complete, involving everything from mobile services for corporate executives to payments processes to big data, and, who knows what’s next?

And that in part is why, once someone comes aboard Capital One Labs, they won’t be confined just to their specialty. Barnes envisions having cross-pollination with other groups.

“Innovation,” he explains, “can’t be confined to one area.”