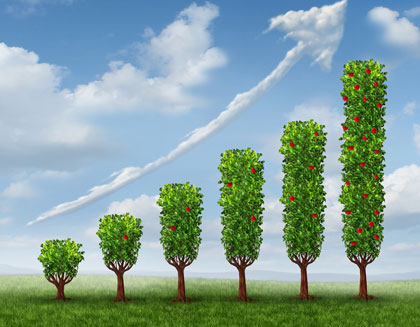 The spring rally in the U.S. stock markets may have provided gains to some investors, while the spiked valuations left others bemused about how to profitably allocate capital. Identifying companies with potential to grow further is vital in rising markets.

So SNL scanned first-quarter 2013 financial data and found 11 tangible book value (TBV) winners, stocks that possess healthy characteristics to stand out from their peers when it comes to creating shareholder value.

Due to the elevated valuations across the banking sector, the price-to-tangible book cap for the new list had to be relaxed, signifying that the market might have become more efficient. 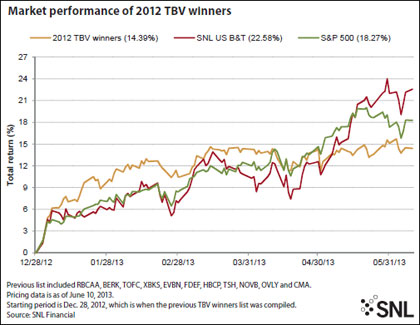 Eight of the 11 companies from the prior list experienced a double-digit total return and three of them were above 20%. Dallas-based Comerica Inc. recorded the highest return of 29.58%, followed by Defiance, Ohio-based First Defiance Financial Corp. and Redding, Calif.-based North Valley Bancorp at 27.40% and 22.86%, respectively.

To create the first list of U.S. banking TBV winners in 2013, SNL started with all major-exchange-traded banks and thrifts headquartered in the U.S. with total assets of at least $1 billion, up from $500 million in the prior list, and trading below 1.50x TBV, up from 1x.

The most important criterion, the lynchpin for TBV winners, was growth in TBV over multiple recent periods. We selected a minimum of 10% growth (gross of cash dividends paid), up from 7.50%, for the 12 months ended March 31 and 2.50% growth (also gross of dividends) for the quarter ended March 31. Other criteria were adjusted nonperforming loans to total loans of less than 3.00%, down from 3.5%, and tangible common equity to tangible assets of at least 8%. 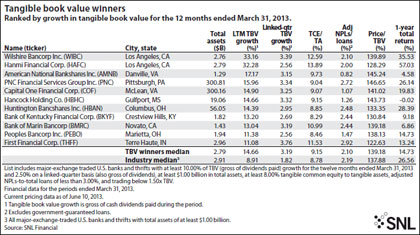 Interestingly, the 2013 list contains no repeats from the previous 2012 list. Three of the 11 companies are based in California, including the two companies with the most TBV growth on an LTM basis. Ohio and Virginia each headquarter two companies on the list.

In terms of assets, the TBV winners are grouped in distinct segments. Seven of the 11 companies have less than $3 billion. Two companies are between $15 billion and $60 billion. And two are just over $300 billion. Pittsburgh-based PNC Financial Services Group Inc. is the largest company on the TBV winners list, with assets of $300.81 billion. McLean, Va.-based Capital One Financial Corp.'s assets of $300.16 billion rank second on the list. Both companies interchanged their ranks in SNL's ranking of the largest U.S. banks and thrifts at the end of the first quarter compared to the prior quarter.

Delving into the winners' numbers

Los Angeles-based Wilshire Bancorp Inc. tops the list with the highest TBV growth of 33.16% during the 12 months ended March 31. All of that growth flowed through its stated TBV. Wilshire only recently reinstated a quarterly cash dividend after suspending payments nearly three years ago.

Wilshire operates out of 25 branches, of which 18 are in California, followed by three in New York and two
each in New Jersey and Texas. Its East Coast franchise will expand with the acquisition of Palisades Park, N.J.-based BankAsiana, announced June 10.

Wilshire had the highest ROAA and the best efficiency ratio among all companies on the list for the three months ended March 31. The stock's upside potential is not a secret as it was named one of the top picks by D.A. Davidson & Co. in May.

The second-highest LTM TBV growth belongs to Los Angeles-based Hanmi Financial Corp. The stock provided the highest one-year return on the list of 57.03% as of June 10. Hanmi has been in the news this year regarding possible M&A activity.

FIG Partners LLC upgraded the stock to "outperform" at the end of April, writing, "In our opinion, HAFC is a legitimate competitor in the Korean American bank space to which peers will have to devote more attention. Unless, that is, they can merge with HAFC."