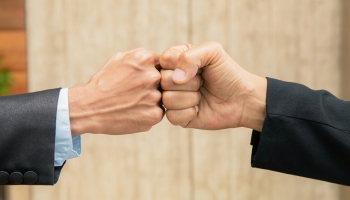 Two leading community banks in New York are to merge to boost their scalability and resilience in a $489 million deal, it was announced last week.

Bridge Bancorp, parent company of BNB Bank, and Dime Community Bancshares, which owns Dime Community Bank, said in a joint statement that they had agreed a merger deal to combine their “complementary banking platforms” into a “premier community-based business bank”.

The “merger of equals” would result in a bank with more than $11 billion in assets and $8 billion in deposits across 66 branches in New York state.

Kevin O’Connor, president and CEO of Bridge Bancorp, said: “Our enhanced branch footprint and increased capital base will allow us to better serve the needs of our customers.

“In addition, both companies have strong balance sheets and demonstrated histories of low loan losses through prior cycles, which give me confidence that we will be well-positioned to succeed in any environment.”

Dime CO Kenneth Mahon added that the merger was the “next logical step” in his company’s transformation from a monoline lender to a diversified commercial bank.

Dime is to merge into Bridge, with Bridge and BNB Bank as the surviving company. However, the new entity will trade under the Dime Community Bank brand given its “significant branding power”, the companies said.

O’Connor will be CEO and Mahon will be executive chairman of the new company. The deal is expected to complete in the first quarter of next year, subject to regulatory and shareholder approval.

Meanwhile, First Horizon has completed its merger with IBERIABANK, creating an $80 billion banking giant — the 42nd biggest in the US.

Bryan Jordan, president and CEO of First Horizon, said the combined company’s scale, diversification and expertise would “uniquely position us to better serve our clients and communities, accelerate our growth and create long-term shareholder value”.

Several other transactions have completed in the past few days.

Mississippi-based BankFirst Capital Corporation has completed its acquisition of Alabama’s Traders & Farmers Bank, resulting in a $1.8 billion banking group with 32 locations across the two states.