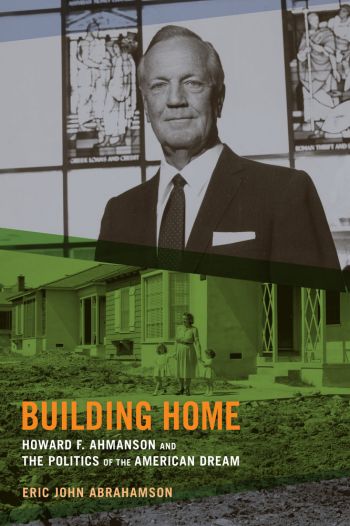 In 1946, a friend told Howard F. Ahmanson he knew of a savings and loan association that was for sale. You should buy it, the friend said. This casual suggestion launched Mr. Ahmanson's brilliant career as a financial services entrepreneur. He bought the thrift (and many, many others), and by 1957, he owned the largest S&L in the world--Los Angeles-based Home Savings and Loan Association (now part of JPMorgan Chase).

As economic historian Eric John Abrahamson makes clear in Building Home, Ahmanson was no rookie when he bought his first S&L. He had already established himself as a brilliant, far-sighted, innovative, and highly disciplined entrepreneur.

Beginnings of an industry giant

While still in college, Ahmanson, following in his father's footsteps, started an insurance business that eventually captured 50% of the market for residential fire insurance in Los Angeles. He directed his powerful selling skills at prospective customers in underserved markets that other agents regarded as "chicken feed."

The young man also showed an unusual ability to assess risk: The loss-rate on policies he wrote was a small fraction of the industry average. While others lost a fortune during the Great Depression, Ahmanson made his fortune. He did so by writing insurance on foreclosed property and letting cash-strapped thrifts pay the premiums by giving him deeply discounted real estate ("It was like being an undertaker at a plague," he said).

Abrahamson shows that, by the time Ahmanson entered the S&L industry, he knew as much about the business as his most-experienced competitors.

In Building Home, Abrahamson skillfully develops three separate, but closely related storylines: how a sleepy group of small building and loan associations were transformed into the dominant providers of residential mortgage credit; how these S&Ls helped fuel rapid economic growth in the Los Angeles basin; and how Howard Ahmanson became, by at least one account, the richest man in California and the leading bankroller of Los Angeles's cultural and artistic development.

Ahmanson's only child (Howard F. Ahmanson, Jr.) commissioned Mr. Abrahamson to write this book after other potential authors had declined the assignment due to a shortage of source material. He made a good choice. Having written numerous corporate histories, Abrahamson clearly knows how to track-down hard-to-find information on his subject, and he does an impressive job under difficult circumstances of documenting Ahmanson's life--warts and all. He is not always able to shed light on key events in that life--for example, the reader will learn very little about the reasons for the break-up of Ahmanson's 28-year first marriage--but this is primarily because his subject left relatively few documents that gave voice to his inner thoughts and feelings.

How Ahmanson made home lending a success

Get banking news, insights and solutions delivered to your inbox each week.

The secrets to Ahmanson's success as a thrift entrepreneur are no longer secret. He kept Home's general and administrative expense ratio at a level that was less than 60% of what other large S&Ls reported, using a variety of clever tricks to build staff productivity.

Ahmanson marketed his products relentlessly to the children of the Great Depression, emphasizing safety and security. He maintained substantial excess reserves that enabled him to take risks his competitors couldn't afford to take ("If you've got cash available, your gun is always loaded.").

And Ahmanson stayed away from products and businesses that he didn't fully understand.

"We're only good when we concentrate on home loans," Ahmanson acknowledged.

Working in the "managed economy"

A recurring theme of Building Home is the success of what Abrahamson calls the "managed economy" in promoting home ownership and economic growth during the late 1940s and 1950s. In this managed economy, there is a "social contract between business and government" that allows government to harness "the capacities of private enterprise to achieve social goals."

There is little evidence that Howard Ahmanson was a party to this contract.

According to Building Home, where a federal program allowed a well-managed thrift to make money promoting the government's home ownership objectives (e.g., VA loan guarantees), Ahmanson jumped in. Where such opportunities were absent (e.g., FHA mortgage insurance), he stayed out.

Such profit-seeking behavior is characteristic of all market economies, regardless of the regulatory regimes they employ.

The "managed economy" to which Abrahamson refers is more properly labeled a "sheltered workshop," where S&Ls' exposure to competition from new entrants and other financial institutions was muted. The gifted Ahmanson did not need these protections to become fabulously wealthy, although he was adept at exploiting them for his own benefit. Nor is the existence of a social contract between business and government needed to explain the remarkable rise in homeownership during the late 1940s and 1950s.

A more-competitive financial services industry would not have prevented Ahmanson (and the other thrift executives who attempted to emulated his success) from acting as sandmen for the American dream, given the huge pool of war-induced savings, the enormous pent-up demand for housing, and the technological advances in housing construction--all of which Abrahamson documents.

While in today's lackluster economy, nostalgia for the booming post-World War II era is understandable, we should not yearn for the days when regulators allowed the regulated to write the rules and kept out would-be competitors.

Parallels of today and Ahmanson's day

Although his apparent fondness for the managed economy is not convincing, Abrahamson largely succeeds in developing and documenting his three storylines.

Howard Ahmanson's story, by itself, makes for fascinating reading. His tale is made even more interesting when it is expanded to include the evolution of the thrift industry and thrift regulation in California and the cultural development of the nation's second-largest city.

Although he clearly was a super-salesman, Ahmanson may not have been the best salesperson prominently featured in Building Home. Dorothy Buffum Chandler's success in convincing Ahmanson to become the leading contributor to the arts and culture in Los Angeles puts her in the running for this honor. The un-biographied Ms. Chandler, wife at the time of Norman Chandler, publisher of the Los Angeles Times, and a prominent civic fundraiser, would be a worthy subject for Abrahamson's next book.

The reader will find numerous parallels between the period covered by Mr. Abrahamson's book and the recent past. Over-leveraged consumers (the subject of Howard Ahmanson's senior thesis), concerns about the mortgage-market dominance of federally sponsored enterprises, and calls for a moratorium on foreclosures, are prominent features of both periods.

One problem that existed in that earlier era, however, need not concern us today.

Abrahamson notes that, in 1965, the Chairman of the Federal Home Loan Bank Board complained that the interest rates offered on deposit accounts by some thrift institutions were too high, and represented "a betrayal of the public trust."

With Ben Bernanke's help, we appear to have solved that problem.

If you'd like to review books for our online book column, or have recently read a book that you found helpful that we haven't already reviewed, please e-mail [email protected]

Tagged under Books for Bankers,