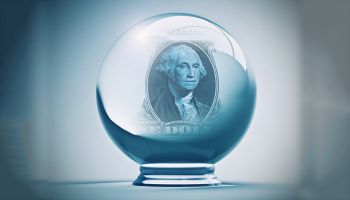 What is money? The classic definition has three parts. For something to be considered money, it must:

1) Act as a medium of exchange;

2) Behave as a store of value; and

It is worth considering the events from a decade ago when we discuss what money was, is and may become. Consider the following timeline:

9/2008 - Collapse of Lehman Brothers and onset of financial crisis

In less than a year, we not only saw the collapse of financial markets, but we saw the imposition of extraordinary (and experimental) monetary policy by central bankers around the world in an effort to ameliorate that very crisis. And in the midst of it all, albeit not well recognized at the time, came the invention of the first truly new concept of money since the first electronic funds transfer in 1973. In fact, some would argue that it is the biggest change in money since paper money first was printed in China in the year 806AD.

With that recent history in mind, let us consider money on a more philosophical basis. Commerce has been part of civilization since the ancient Babylonians around 3000BCE, where lending was prevalent for both commercial uses like farming, as well as for home mortgages. But currency is a different story. Units of currency did not come into being until approximately 1300BCE, when cowry shells were deemed to have value throughout Asia and Oceania and exchanged for goods and services.

Around 1000BCE China moved on to the first metal coins, which accrued their value based on the Chinese Emperor’s word. These coins were copied in the West some 300 years later. But then it was almost 1500 years before paper money was invented in China, and another 855 years before the first Western paper money was printed in Sweden in 1661. (There is a great irony in this as Sweden in 2018 is the nation furthest along from eliminating cash from society and moving entirely to electronic transfers. Only 20% of transactions utilize cash there.)

As mentioned above, 1973 brought about the first electronic fund transfer (EFT) which has led to a significant increase in the amount of commerce that can be transacted. Once value could be attributed to someone without needing to hold either paper or specie, it became much easier, and more efficient, to transact across distances. This not only improved finance, but commerce as well. Consider that paying for imports is now

significantly easier via electronic means than it was when actual paper money or precious metals needed to be delivered to make payment.

Money has come a long way since it was first created. The question at hand is, how is it likely to change going forward? It seems a fair assumption that it will change, if for no other reason than the fact that technology continues to march forward and will drag money and finance along with it.

Clearly, Bitcoin is the newest idea in centuries. It was designed to completely upset the apple cart. Money has always been a political construct, created by governments via their central banks, and designed to enhance commerce as well as insure there was a way for citizens to pay taxes. However, as is their wont, politicians have a difficult time controlling themselves when it comes to spending money, and if they don’t actually have it at hand there are two choices, borrow it or print it.

In the 1960’s and 1970’s, with the US spending on both guns (Vietnam War) and butter (Great Society programs), they found themselves sorely lacking funds. While the Treasury did borrow, the Federal Reserve, under pressure from President Richard Nixon in the early 1970’s, also printed up lots more dollars. The ensuing inflation, which spread globally, was quite destructive to economies everywhere. It was at this point in time where central banks fought for, and largely won, the right to independence. The idea was that if a central bank was not beholden to the government with regard to their policy choices, it would prevent a repeat of the inflationary 1970’s. Throughout developed markets, this has become the norm, although that is not necessarily true in the emerging market bloc. One need only look at the current crisis in Venezuela, or the situation in Turkey, where the President is taking control of monetary policy while driving inflation much higher, to see what can occur if the central bank is not independent.

But independence from the legislative and executive branches of government does not mean that central banks are unaware of the political ramifications of their activities. In fact, as is evidenced by their actions of the past decade, central banks are perfectly willing to behave politically – hence the idea behind Bitcoin. Removing the political system and the need for trust from the ability to transact is a truly groundbreaking idea, and one that politicians do not like at all. If something is considered money but is not under political control; that would change the political calculus greatly.

It is for this reason that the probability of Bitcoin or any of its imitators becoming a true form of money is exceedingly unlikely. While it may be used as a medium of exchange for some situations, recent history shows that it is losing adherents, not gaining them, for that purpose. As to the unit of account, even now it has not come close to achieving that milestone nor does that seem likely any time in the foreseeable future. (Bitcoin owners almost universally describe their assets in dollar terms, not as a number of Bitcoin.) While it can be construed as a store of value, its inherent riskiness (as measured by its extremely high volatility) makes it more suitable for speculators than investors. In the end, it is difficult to make the case that any government will ultimately accept Bitcoin, or any cryptocurrency, as payment of taxes. And after all, for a government, nothing is more important!

However, there is no reason that government’s won’t adopt the pieces of the technology they think are useful to create cryptofiat currencies, where the accounts and payments use blockchain technology to work, but the ledger is still essentially centralized. In fact, this seems a highly likely outcome over the next decade or so. Adding transparency to transactions is something that every government would like to be able to achieve.

The demise of physical cash, something which has been mooted a number of times in the past few years (see Summers & Sands, 2015, Haldane 2015) remains an active discussion amongst senior financial officials around the world. And this may be the technology that allows governments to achieve that goal. Cryptodollars or cryptoeuros would be a politician’s (or more accurately a tax man’s) delight. Perfect clarity of all a person’s or company’s transactions and complete control of the monetary system is exactly the power that every politician dreams about. And it could well be where the evolution of technology is taking us when considering the future of money.