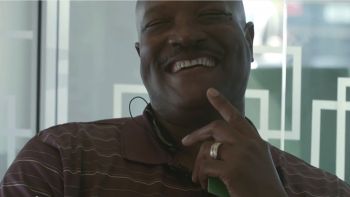 Edwin, an elementary school gym coach, receives news in TD Bank video that he is one of 24 customer winners of major aid to assist their communities. TD Bank told the story of #MakeTodayMatter through several social media platforms.

This fall TD Bank stores interviewed customers known to be involved in local causes, ostensibly for a survey. One key question was, “What could TD Bank do to make a difference?”

What the customers didn’t know: Their answers and ideas weren’t just for a survey.

They were all in the running for special grants from the bank to accomplish their dream community projects. The bank selected 24 ideas in U.S. and Canadian communities and handed over $20,000 to $30,000 to each finalist, with a special provision, as put by one local TD executive who told her winner: “We don’t want to do this next month, next week, it is for today.”

In November the finalists received their funds—the surprise deskside presentations captured on video—with the understanding that they were to take the money and run. That is, run to get the project done.

So, recipients such as a West Palm Beach, Fla., elementary school gym coach rushed out to put the money to work. The coach filled cart after cart with football equipment and cheerleading supplies for a youth league short on both. In Philadelphia, a gala for foster girls was held to boost their self-esteem. Projects for children, senior citizens, and those in need of a good meal all got started with TD Bank’s donations.

Part of the bank’s intent was to pass along the stories to inspire further community activity and involvement. Vinoo Vijay, TD Bank’s chief marketing officer, saw social media, especially professionally produced videos, as an effective way to tell the overall story and the individual stories of each project.

“Video is a fantastic way to do this,” says Vijay. The bank started a website page about the program pulling together videos, photo slideshows, articles about each project, and a Twitter feed including many comments posted with the bank’s hashtag #MakeTodayMatter. A huge stream began and has continued as more people in the social universe learned of the program. The bank has been telling the stories through Facebook posts as well.

“All of our social media channels worked together on this,” says Vijay. “Video was particularly important.” Videographers captured literal jaw-dropping moments as TD employees told recipients of the awards they hadn’t even known they’d been in the running for. Astonishment, laughter, even tears were captured and posted for viewing. Cameras also captured the events themselves—such as a formerly housebound woman in a wheelchair being able to leave her home, on a bank-paid ramp, for the first time in years. Some appear as videos, others as slideshows.

Vijay says the bank definitely wants to do something like this again, though the details are still under discussion.

Additional projects among the 24 included a community cleanup; a shop where people who had fallen on hard times could obtain work-appropriate business clothing for free—suits and shirts for offices, outdoor gear for manual labor jobs; trail restoration; and a project to improve the lives of animals in several shelters.

The latter included purchase of 30,000 pounds of dog food. “How awesome is that?” said Samantha, an Asheville, N.C., mother to her daughter as video captured their trip to buy and deliver the meals.

More in this category: « City National reaches out via digital magazine Mobile meets digital signage »
back to top